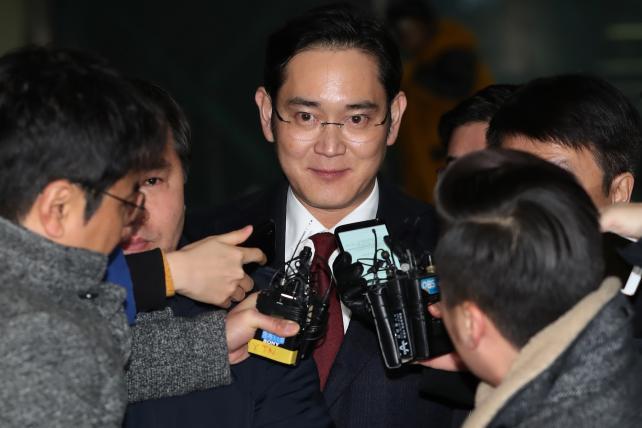 Prosecutors are seeking a warrant to arrest Samsung Group's Jay Y. Lee for allegations including bribery and embezzlement, a stunning turn for the scion of South Korea's richest family groomed for decades to take over the company from his father.

Mr. Lee, 48, the de facto head of the Samsung Group and vice chairman of Samsung Electronics Co., is accused of participating in payments that Samsung made to a close friend of South Korean President Park Geun-hye in exchange for government support in the company's succession planning. A court will still have to determine whether to approve the warrant, which was announced by prosecutors in a briefing on Monday. A hearing is scheduled for Wednesday.

A special prosecution team was established in December to investigate whether Samsung and other chaebol business groups contributed money to Choi Soon-sil, the Park confidant, in exchange for political favors. President Park has been already impeached and her powers suspended. Samsung shares, which have been near record highs, fell 2.1 percent to 1,833,000 won at the close in Seoul.

"We believe that there was an illegal request made by Samsung in facilitating the process of business succession," Lee Kyu-chul, a spokesman for the prosecutor's office, said in the briefing. The arrest warrant would let prosecutors continue their probe while Samsung's Mr. Lee is detained. Formal charges and an indictment would follow. The total amount of bribes, including promised funds and money embezzled, is alleged to be about 43 billion won ($36 million), Mr. Lee of the prosecutor's office said.

Samsung denied the company provided financial aid in return for any favors. "We can't accept the prosecutor's argument that we made illegal requests associated with the merger and management succession," Samsung Group said in a statement. "We believe the court will make a wise decision."

The investigation jeopardizes Mr. Lee's ability to take over Samsung Group and risks further destabilizing the leadership of South Korea's largest company. His father, Chairman Lee Kun-hee, has been hospitalized since suffering a heart attack in 2014. Samsung is now facing its second crisis in a matter of months, after it was forced to pull the Note 7 smartphone off the market last year because the device was catching fire.

The presidential scandal has gripped South Korea for months, with millions taking to the streets to demand the ouster of President Park. Lawmakers questioned the heads of nine chaebol to understand whether they were pressured to give money to foundations controlled by Ms. Choi. Then in recent weeks, investigators have focused on Samsung to determine whether the company made payments to gain the backing of Korea's national pension fund for a controversial merger between Samsung affiliates in 2015.

Prosecutors have homed in on Samsung's contributions to entities linked to Ms. Choi, including a 1 billion-won horse for her daughter and millions of dollars for riding lessons. The money allegedly was in exchange for helping ensure a smooth transfer of power at Samsung to the younger Mr. Lee.

One key question is whether the administration exerted pressure on Korea's national pension service to support the merger of two Samsung Group companies, Cheil Industries Inc. and Samsung C&T Corp. The controversial deal was approved in 2015 and made it easier for Mr. Lee to gain influence over the sprawling conglomerate.

The merger of Cheil and C&T was opposed by activist investor Paul Elliott Singer and succeeded by a narrow margin, thanks to the support of the NPS, then the biggest shareholder of C&T. The special prosecutors have previously arrested Moon Hyung-pyo, former chairman of the pension service. Mr. Moon acknowledged that he pressured NPS officials to support the Samsung merger, special prosecutors said last month. Earlier on Monday, prosecutors separately indicted Mr. Moon for abusing his authority and for perjury.