Marketers Can Back Playlists With Millions of Followers
A playlist sponsored by Kia, which tested Spotify's new offering.
Credit: Spotify/Kia

Spotify is expanding its advertising opportunities by beginning to let marketers sponsor its owned-and-operated playlists, which often have millions of followers.

Spotify has grown its business from a search-and-play platform for big music fans to one that also has millions of customers who might not necessarily use it to seek specific music but want to easily discover songs, Mr. Benedik said.

The owned-and-operated playlists that Spotify creates generate more than 1 billion streams per week, according to Mr. Benedik. The No. 1 playlist, Today's Top Hits, has about 8.3 million followers. The second most popular playlist is Rap Caviar, followed by Baila Reggaeton.

Mr. Benedik said he considered sponsored playlists Spotify's "native play," noting that "brands want to know how they can attach themselves natively to content without being interruptive... It's that holy grail of the right audience at right moment. If you really want to reach a Spotify user and activate this coveted audience, do it in a way that's not interruptive but that is immersive."

Marketers won't be able to sponsor every Spotify playlist. The company will start by opening up 25 playlists to sponsorship in the U.S., though it plans to expand that group over time. 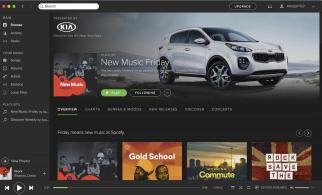 A Kia-sponsored playlist on desktop.

Spotify has been prioritizing its data play in an effort to help advertisers market to people based on what they're doing while listening to particular genres or playlists. Mr. Benedik said each playlist offers its own set of consumers. Some are more often listened to on mobile, such as workout and dance-oriented lists, while others are more popular on desktop while people are at work.

Spotify plays ads to consumers who use its service for free. Premium subscribers, who pay $9.99 per month, are not served ads and will not see sponsors on Spotify playlists.

Ads will be served in sponsored playlists as normal, although the first ad break will go to the sponsor, which will also recieve category exclusivity. Sponsorships will be sold for a week at a time.

Spotify tested out the new product with Kia, which sponsored New Music Friday. Kia attached its logo near the top of the playlist. "We wanted to provide our Sportage customers with a unique experience and believed 'New Music Friday' was a natural fit for their interests," said David Schoonover, senior manager-head of digital, CRM and dot-com, Kia Motors America, in a statement. "This new platform is an engaging and interactive experience that allowed us to further target consumers that align with the Kia brand and, in particular, with the all-new Sportage CUV."

Last May, Spotify began offering marketers the ability to target ads to the then-roughly 45 million people who use Spotify's free service based on the playlists they stream. Advertisers could target playlists in 15 categories of moods and activities like workout, commute, happy or chill.

It uses its first-party data and also harnesses analytics from The Echo Nest, a music-intelligence firm it acquired in 2014. In 2013, it acquired Tunigo, which Mr. Benedik said was among the best of the music discovery and curation platforms. It also said it recently began partnering with Krux, a data management platform, to target users.

Spotify has a number of ad formats, including an audio ad suite that serves roughly two minutes of ads per hour, versus the eight to 15 minutes of ads per hour on terrestrial radio, said Mr. Benedik. Others include a video ad suite that includes sponsored sessions on mobile, which is when a person using the free service will watch a 15-second video from a brand in exchange for 30 minutes of ad-free listening. The mobile service also offers an overlay ad unit, while desktop offers homepage takeovers and video takeovers in between songs.

Spotify has been battling increased competition from newer streaming music services. Last June, the company said it had 20 million subscribers and 75 million active users, but in March, its founder-CEO Daniel Ek said in a tweet that it had reached 30 million subscribers.

That suggested that the arrival of Apple Music last June hasn't had much of an effect on Spotify, at least in terms of paying subscribers. Executives for Apple Music said in February on John Gruber's podcast "The Talk Show" that its subscriber base had reached 11 million users since it arrived at the end of June 2015. Tidal, which Jay-Z bought and reintroduced in March 2015, said in March 2016 that it had reached 3 million global subscribers. Tidal is a subscription-only, ad-free service, though the subscriptions are tiered by level of music quality.