Sprint this morning is shocked, shocked! that DirecTV wouldn't sell it ad time to undermine new DirecTV and AT&T bundles.

Sprint last month began a promotion offering DirecTV customers a year of free service if they switch their phone service to the carrier. It's a strike at AT&T's effort to draw consumers closer with packages combining its phone service with DirecTV.

But when Sprint tried to buy commercial time on DirecTV to promote its offer, it was rebuffed, according to Sprint.

"What better way to tell DirecTV customers about this amazing deal that would help save them money than advertise on DirecTV?" the company said in a press release Thursday. "So, imagine our surprise when we tried to buy advertising on DirecTV and our requests were denied."

Sprint took out full page ads (below) in the New York Times, USA Today, Las Vegas Review Journal and Dallas Morning News, to gin up attention for the promotion and the the attempt to buy time on DirecTV. The newspaper ad includes a letter sent to AT&T and DirectTV executives from Sprint Chief Marketing Officer Kevin Crull.

"Through our media agency we have made repeated attempts to buy DirecTV-controlled inventory," Mr. Crull said in the letter. "Furthermore, we've sent repeated requests for an explanation to your head of sales, but we've heard nothing in return ... I would have expected that AT&T and DirecTV are committed to a fair and competitive marketplace and the free flow of information."

When asked why the Sprint would be surprised at DirecTV's utterly unsurprising rejection of its ad buy, the spokesman said: "We expected some pushback due to the relationship with AT&T, but not to be completely denied the ability to advertise this offer. AT&T expressed confidence that their offer(s) to DirecTV customers were competitive with ours. We believe this action tells a different story."

Of course, Sprint is pulling out all the marketing stops, probably because it was recently supplanted by T-Mobile as the nation's third largest carrier, behind AT&T and Verizon.

Asked for comment, an AT&T spokesman replied with only one sentence: "It's another Sprint marketing gimmick for a misleading offer." 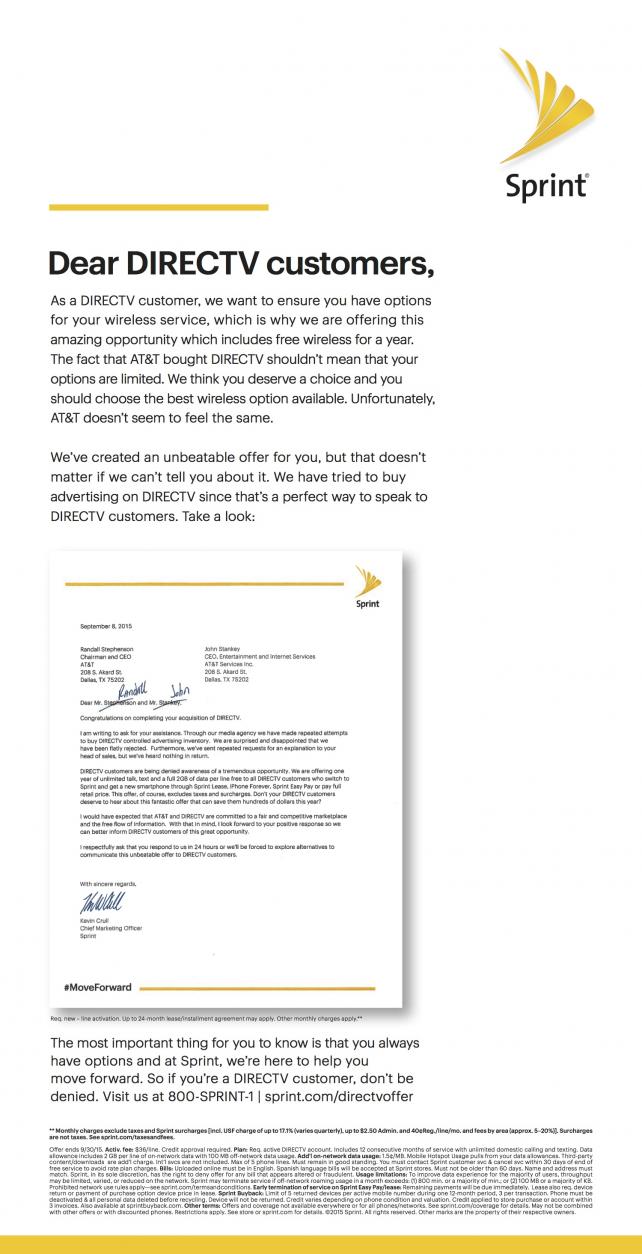