Sprint, T-Mobile to Spend Big in Pursuit of Verizon, AT&T

U.S. wireless customers are proving to be a stubborn bunch when it comes to changing providers. But that's not stopping carriers from pumping big bucks into advertising in hopes of grabbing market share. Wireless is one of the country's big-spending ad categories -- carriers collectively dropped $5.3 billion on measured media last year, according to Kantar Media.

Analysts expect T-Mobile and Sprint to increase ad spending to persuade consumers to switch from the long-time industry leaders. T-Mobile has adopted a combative message under CEO John Legere, aggressively advertising itself against AT&T specifically. Sprint Nextel shareholders recently approved an acquisition offer from Japan-based mobile provider SoftBank, giving it the deep pockets needed to contend with AT&T and Verizon.

Buying market share isn't a surefire strategy. Last year, the top four wireless providers by share -- Verizon, AT&T, Sprint and T-Mobile US, in that order -- changed their respective measured-media spends by hundreds of millions of dollars but saw little change in terms of their pieces of the market.

"The wireless market is saturated, so the advertising spending and the underlying market shares are related to churn," Forrester analyst Charles Golvin said. "The marketing is really about switching."

A big piece of Sprint and T-Mobile's marketing will be their unlimited-data offerings. AT&T and Verizon don't offer unlimited data plans to new customers, and Verizon customers can't get a subsidized upgrade to a new phone without surrendering their unlimited plan. Sprint may look to undercut competitors' prices after the SoftBank deal is completed. When SoftBank bought Vodafone Japan, it reduced monthly charges to about a quarter of what its competitors charged.

But IDC analyst Carrie MacGillivray said marketing messages in the coming years will focus on network speed rather than data or pricing.

"Pricing plans aside, we invest in and build the best network and we have that message in our advertising," said Brian Angiolet, Verizon's VP-advertising.

Similarly, AT&T Chief Marketing Officer David Christopher said in a statement that it is committed to "building the nation's fastest 4G LTE network." 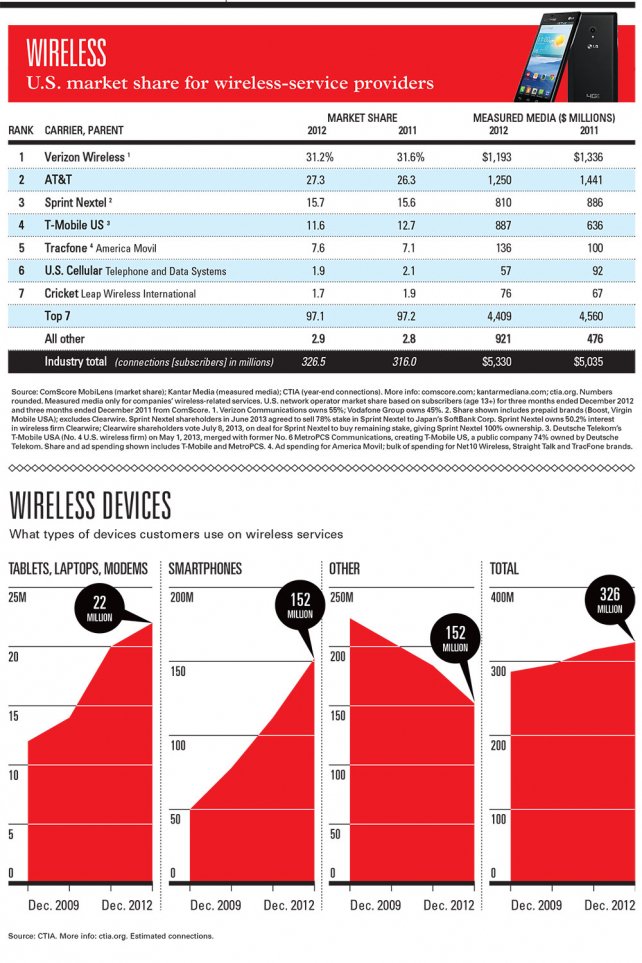