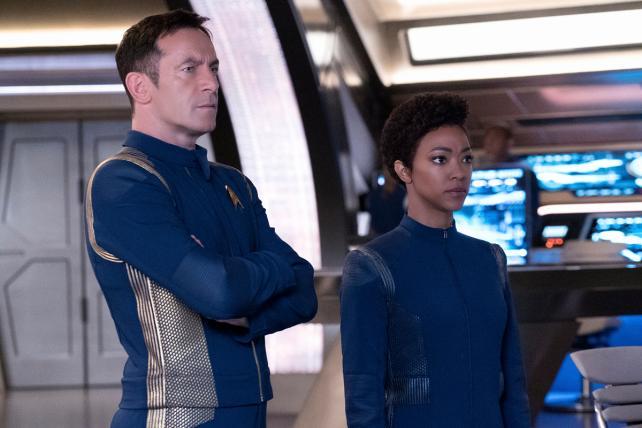 CBS streams 'Star Trek: Discovery' on its All Access service but doesn't broadcast it on TV.
Credit: Michael Gibson/CBS

CBS Corp. overcame a slump in TV advertising to report higher sales and profit in the final quarter of 2017, buoyed by offering programs to online providers such as Netflix and attracting subscribers to its own All Access service with shows like "Star Trek: Discovery."

CBS boosted sales from licensing programs by 33 percent and subscription fees by 20 percent, according to a statement Thursday. The company said its two paid streaming services have reached almost 5 million subscribers.

CEO Leslie Moonves is trying to sustain momentum at the company he has led for more than a decade while his board explores a merger with Viacom, which like CBS is controlled by the Redstone family. Viacom owns cable networks including MTV and Nickelodeon, as well as the Paramount Pictures studio.

Moonves opposed the deal in 2016 but has been urged to reconsider by Shari Redstone, who is vice chairman of both companies.

The owner of the most-watched U.S. TV network has been reducing its reliance on advertising in recent years, extracting higher fees from pay-TV providers and selling TV shows to streaming services. It has invested the money in its own online services, including a version of its flagship network, called CBS All Access, and Showtime.

Moonves said on a call that the company plans to have an online sports service by March and will introduce All Access in Canada in June.

Fourth-quarter earnings at CBS, excluding some items, rose to $1.15 a share, according to the statement, beating the $1.11 average of analysts' estimates. Revenue grew 11 percent to $3.92 billion, compared with projections of $3.71 billion.

In the past few years, CBS has sold its radio and billboard businesses to focus on television, while repurchasing billions of dollars of its shares. The company also owns Simon & Schuster publishing.