If you've ever been so moved by a roundup of cat images on BuzzFeed that you wanted to create an animated GIF of your reaction, now is your chance. 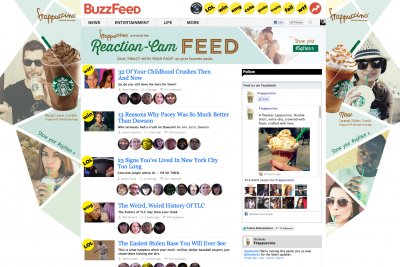 BuzzFeed has introduced a "reaction cam" button at the bottom of posts sponsored by Starbucks and non-sponsored posts deemed "safe for work" that will create and share a three-second animated GIF of visitors' faces as they react. Each post will feature the nine most-recent reaction-cam GIFs at the bottom, and links shared through Facebook or Twitter will take others to their friends' animated GIFs in the comments sections.

For now users can only create the animated GIFs on a computer and not on a mobile device, though users on mobile devices will be able to see GIFs posted by other users. The sponsored reaction-cam will run until June 24.

BuzzFeed already has a slew of reaction buttons, from "LOL" to "WTF," at the bottom of stories that users can click to express their feelings on a particular post, and lets users sort stories by clicking on those same buttons at the top of the homepage.

The reaction-cam button -- a small camera icon -- takes interaction on BuzzFeed to a new level, said BuzzFeed Chief Creative Officer Jeff Greenspan, who joined in September. "The most human way to communicate a reaction is through your face," he said. "We thought we could bring a higher level fidelity to BuzzFeed with how people share their emotional reactions."

BuzzFeed Labs, which became a formal entity within BuzzFeed two months, began developing an idea for a reaction-cam and approached Starbucks and its media agency, PHD, to work on it together. It's the first time the companies are working together.