Every time someone pins, clips, grabs or posts your images, disseminating them around the internet, it should be a good thing for the brands whose products are finding more eyeballs. One problem: Once the image is shared, the data associated with the image, such as price and availability, are gone.

Enter Stipple, a service for publishers to tag images with additional functionalities such as price, product information or even video. That information stays with the image no matter where it's reproduced, or if it's updated -- say, if there's a price change. 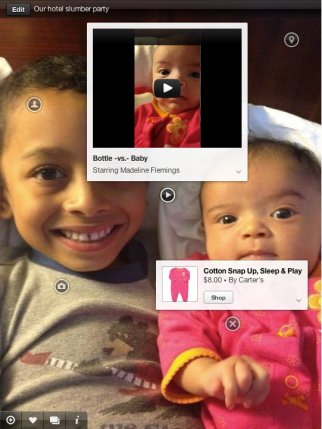 Even if someone visits your site and saves an image to their computer, alters the format and file type, and re-uploads it, the context will transfer.

For example, upon the launch, all Etsy sellers will be given free access to Stipple to connect their stores' product catalogue, meaning prices will be updated automatically, as will product availability on all copies of Etsy seller photos, wherever they're published, pinned, or otherwise posted on the internet.

Stipple is already active on 4000 publisher platforms, but for sites such as Pinterest or Facebook, that don't have Stipple built in, they offer a browser plugin for users to install, which brings all of the added functionality to those sites. Stipple also added a consumer app and the ability for users to add data to their own photos.

As co-founder and CEO Rey Flemings points out, images are in many ways the currency of the web. "More people look at the brand's images on the open web than those who visit the brand's websites and view its ads -- combined," he said. "Images are the web's largest channel in terms of audience. But no one has had the ability to actually remain connected to and in control of their images on the open web."

To show just how prevalent brand images are across the web, Stipple built an image calculator for Ad Age readers at stipple.com/imageaudience. Just input a brand's URL to see how widespread its images are. BMW, for example, 405 million hits come up (at this writing) in just the past seven days.

Stipple falls into the same space as ThingLink and Luminate, which both attach a commerce element to images. The idea of image-based commerce has marketers excited about services such as Pinterest and The Fancy. But in order to capitalize on this opportunity, sellers need a system to assert some degree of control -- a way to keep the information associated with their products consistent across the web.

Stipple is an attempt to solve this, but for it to matter, users must see enough value in it to download software, a tall hurdle that has killed plenty of good ideas in the past. Mr. Rey was vague on how Stipple plans to overcome that , though he said partnerships with retailers such as Etsy would be core to the strategy.

After receiving $2 million in initial funding from Kleiner Perkins Caufield & Byers, Justin Timberlake and others, in May, Stipple raised another $5 million in Series A funding, led by Floodgate and Relevance Capital.

David Teicher
Follow View all articles by this author