Group M Facebook Study: Reach of Organic Posts Is Down, Engagement Is Up

Over the past year, a hard, cold fact has sunk in for brands about Facebook: If you want to reach your fans, increasingly you have to pay for it.

That's a growing concern for agencies doing business with Facebook, so now one of the very biggest, WPP media-buying unit Group M, is investigating the matter.

Research conducted by Group M Next (a unit devoted to sourcing new technologies) into pages operated by 25 brands finds that the share of Facebook users seeing organic posts from a brand they "like" was down 38% in the five weeks after Sept. 20, from 15.56% (consistent with the average 16% Facebook has often reported) to 9.62%.

While those findings won't be heartening to brands, researchers found a silver lining: engagement on posts in the form of comments, likes and shares is up significantly, from 0.76% before the algorithm change to 1.49% after. That's nearly identical to the results of a Ehrenberg-Bass Institute study of 200 top brand pages earlier this month.

The result is that while fewer fans are seeing organic posts in their news feeds, those who do are more likely to have a real affinity for the brand, as opposed to users who may have clicked on the "like" button to enter a contest.

The bottom line is that many brands will have to ante up more ad dollars to maintain the reach among fans they were accustomed to. But the study also digs into the change in newsfeed reach by post type to give brands insight into what content performs best in the new environment. It finds that links took the biggest hit from algorithmic changes and were being seen by 68.19% fewer fans after Sept. 20, but text status updates started getting viewed by 19.48% more.

The conclusion is that brands that change up the mix of their posts to rely less on the ones that saw the biggest drops in exposure can maintain their newsfeed reach at above 12% and thus use "paid advertising as a supplement, rather than a full replacement," according to the paper.

"If you reallocate, you can make some of [your reach] back so it's not 40% that you'll have to go out and pay for," said Brandon Fischer, Group M Next's Director of Predictive Insights. "You'll still need to supplement with some kind of paid strategy."

Group M Next didn't provide a list of brands in the study but says they represent a cross section of categories and have Facebook fan bases in the multiple millions at the upper end. Group M agencies MindShare, Maxus, Mediacom and MEC boast clients like Unilever, IBM and Volkswagen.

The findings are at odds with Facebook's continued rebuttal of the contention that organic posts are reaching a smaller portion of fans. (The related inference it most objects to is that the change was made to encourage use of its ad product "promoted posts" to offset the lost reach.) Facebook contends that algorithmic changes were made to weed out spammy, non-engaging content, but that median reach of pages hasn't changed.

"A few times a year we perform quality checks on the news feed algorithm to ensure high-quality and relevant posts," Facebook said in a statement. "Based on a recent quality check, we made an adjustment to the news feed algorithm to respond to the negative feedback signals of spam and people hiding posts. Current signals show the adjustment has been successful. Median reach of Facebook pages has remained the same, while spam complaints and stories hidden by users have fallen significantly."

But if the higher post engagement Group M Next observed is true across a wide spectrum of pages, the case can also be made that Facebook's news-feed algorithm changes are a net positive for brands. 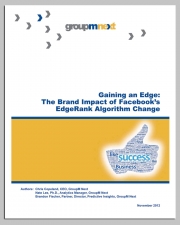 "It allows us to hone in on the segment of the audience that truly is interested and engaged," said Jeff Semones, president of the Group M-operated social-media agency M80, who also observed that the change in news-feed exposure for a client with a sizable and consistent Facebook ad spend had been "neglible." "What we're seeing now is a benefit to marketers in spite of the reduction in reach."

Group M agency Mediacom's client Pennzoil has observed both reported phenomena of diminished newsfeed reach and increased post engagement over the past two months, but Global Associate Brand Manager Suzanne Clerkin says her team doesn't intend to increase Facebook ad spend as a result. She says the increase in post engagement is a desirable outcome.

"We understand that not everyone who likes our page will able to see every post we monitor, but we're hoping that Facebook will help us continue to monitor the fans who appreciate us the most," she said.

Netflix is raising its prices

How video game advertising plays into Take-Two's deal for Zynga