T-Mobile confirms it's returning to its sixth consecutive Super Bowl 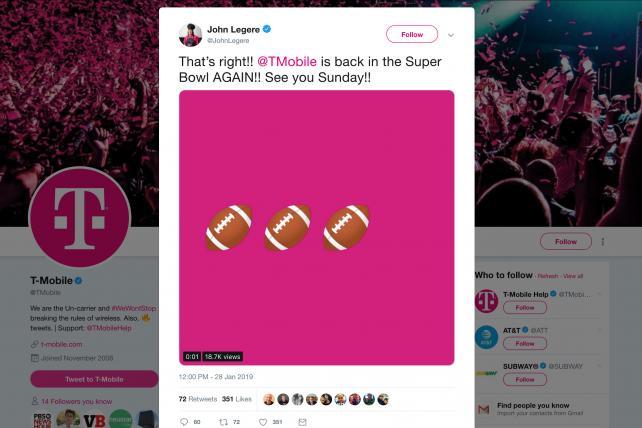 T-Mobile confirmed Monday that it's returning to the Super Bowl, marking it the carrier's sixth consecutive appearance.

John Legere, CEO at T-Mobile, shared the news to his 6 million followers on Twitter with a 2-second clip showing nothing but a football emoji:

That's right!! @TMobile is back in the Super Bowl AGAIN!! See you Sunday!! pic.twitter.com/XA550wPkY5

The company declined to provide any details regarding its upcoming spot.

Last year, T-Mobile used the Super Bowl to promote equality, forgoing the usual gags and stunts it typically pulls against its rivals .That 60-second spot, dubbed "Little Ones," was narrated by "Scandal" actress Kerry Washington and was produced by creative agency Laundry Service.

Meanwhile, Verizon said earlier this month that it's returning to its second consecutive Super Bowl. The carrier created a dozen spots that salute first responders—a theme it played on last year—that it's promoting in the weeks leading up to the game. The company will then debut a new, unseen 60-second video on Super Bowl Sunday.

It's unknown whether AT&T or Sprint will air Super Bowl commercials.