AT&T, aiming to get a jump on an anticipated move by T-Mobile, is offering customers of its smaller rival as much as $450 in credits for devices and services for each line they switch.

The amount of the offer, which begins today, depends on the make, model and age of the smartphone, Dallas-based AT&T said in a statement. Bellevue, Washington-based T-Mobile may be planning a similar offer, Wells Fargo & Co. said, as the companies step up efforts to poach each other's customers.

"The timing of this move is very purposeful," Jennifer Fritzsche, an analyst with Wells Fargo & Co., wrote in a note today. T-Mobile may announce a plan next week offering $350 in credit to customers that switch, Fritzsche wrote, citing market speculation. 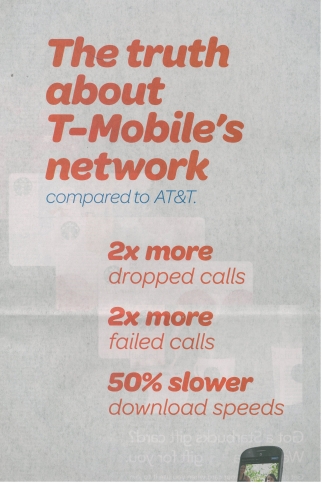 AT&T's battle with T-Mobile is intensifying after the former merger partners spent 2013 exchanging volleys through advertising. The competition is growing more cutthroat as the wireless market becomes more saturated, forcing carriers to go after each other's subscribers for growth.

Pricing war
The two companies have singled each other out in part because they use a similar network technology that makes it easier for customers to switch between them while retaining their devices. Shares of all four major U.S. wireless carriers dropped in New York trading amid concern AT&T's move was a sign of a price war.

Providing a credit can help consumers offset the cost of termination fees to end a contract with a competing carrier, making it easier to switch. While T-Mobile doesn't require customers to sign service contracts, it sells phones on installment plans and charges the balance due for a device when a service plan is canceled.

While the AT&T offer "may instill fears of pricing wars looming," it's "more bark than bite," Ms. Fritzsche said. The company already provides at least $99 for phone trade-ins, and its promotion is only good for users joining plans where they don't get discounts on new phones, she said. She has the equivalent of a buy rating on AT&T shares and is neutral on T- Mobile.

'The uncarrier'
T-Mobile has positioned itself as an "un-carrier" shaking up the industry with no-contract plans, phone financing and lower-cost international roaming rates. AT&T, the second-largest wireless carrier in the U.S., has mimicked some of T-Mobile's price changes while touting the supremacy and speed of its own network.

"Wireless has always been a very competitive industry and a move like this should not be unexpected," said Mark Siegel, an AT&T spokesman.

AT&T trails Verizon Wireless among U.S. customers, while Sprint holds third place in the market.T-Mobile led all carriers adding 1.47 million monthly subscribers in the second and third quarter of 2013.