How Alibaba's Annual Shopping Event Raked in $25B 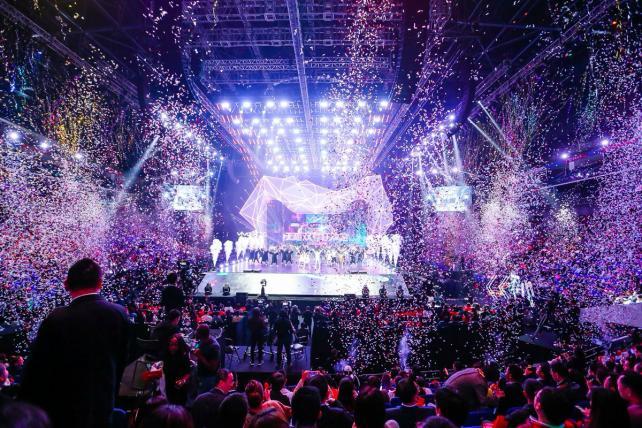 A scene from Alibaba's gala show to kick off the shopping event.
Credit: Alibaba Group

Every year on Nov. 11, Chinese internet giant Alibaba Group hosts the world's biggest shopping event, called Singles Day. Chinese consumers fill their online shopping carts beforehand and stay up until the clock strikes midnight to click the "buy" button, trying to catch the best deals before they sell out.

Alibaba's event on Saturday—once an unofficial Chinese celebration for the unmarried until Alibaba rebranded it as a Chinese take on Black Friday—brought in $25.3 billion in transactions in 24 hours, up 39 percent from last year, which bodes well for Chinese consumer sentiment. Alibaba says 90 percent of sales during the event were on mobile devices.

The numbers are even bigger if you take into account other Chinese retailers and e-commerce companies who have joined in. Alibaba's main rival, JD.com, hosted 11 days of sales culminating in Singles Day, with over $19 billion in total transactions. The are plenty of things marketers and media execs outside China can learn from the event. Here, the highlights:

Mobile gamification makes halftime shows looks 'dated'
Alibaba hosts a four-hour variety show to help viewers count down until midnight, when shopping opens. Pharrell Williams performed "Happy" with Chinese artists, including classical pianist Lang Lang. Tennis star Maria Sharapova competed in a running contest on stage. Nicole Kidman dropped by too. The show is interactive; people watching at home shake their phones to get coupons digitally delivered onto their app, or use them to "catch" rewards or products. And there was an augmented reality game that let viewers bring stars from the stage into their living rooms.

Tom Birtwhistle, a Hong Kong-based director for PwC digital consulting, thinks U.S. and European sports events and the entertainment industry "could learn something about live events in the digital age by looking at this gala." Rather than just a classic halftime show, which he says is "a little dated now", sporting events could try some of Alibaba's mobile gamification tricks for TV viewers, he says.

"You could use augmented reality to get sports stars running through people's homes—if I was a sports company or a venue, I would be all over that," he says.

Chinese brands have come into their own
Anybody who watched the gala got pummeled with marketing about fast-growing Chinese smartphone brand Vivo, the event's top sponsor. (Vivo is also sponsoring the World Cup in 2018 and 2022.) On Singles Day, Vivo's brand name was integrated into the Alibaba gala logo, Vivo stickers flashed on people's screens, and the brand was mentioned in skits and dialog.

Local brands have "a speed, a boldness in terms of experimentation, trying this and trying that, and they have a 'never-give-up' spirit—they want to learn and produce better," Hou says.

Alibaba is doing the same, launching new experiences and offerings before they're perfect, and then improving upon them, Hou says: Multinational brands [need to] be like that, otherwise we'll be left behind."

"New retail" continues to evolve
Alibaba's PR machine went into overdrive this year promoting its catchphrase of "new retail," which means blending offline and online shopping, as well as data and logistics. Alibaba is connecting mom-and-pop shops across China into its data and analytics eco-system, and it's using data from those small shops to help brands like Mondelez understand what consumers want.

It's also creating pop-up shops and experiences for big brands. People in malls and at locations like Pizza Hut played augmented reality games to catch a cartoon cat on their smartphones and win rewards. Alibaba worked with L'Oreal on "magic mirrors" – augmented reality mirrors so people could try on makeup or other products, then click on the screen to order them through Alibaba's Tmall platform and have them delivered.

In Shanghai, Soomee Moon of WPP's Geometry Global checked out two pop-up shops in high-end malls, one for Procter & Gamble's SK-II cosmetics that delivered samples to people who scanned a code, and another from Johnson's Baby with game stations for kids. Both were well-executed, though neither attracted crowds, says Moon, Geometry's regional corporate communications director.

Cool doesn't necessarily mean digital
PwC's Birtwhistle visited pop-ups as well as Alibaba's brick-and-mortar supermarket chain, Hema (the creation of which predates Amazon's purchase of Whole Foods.) "The areas people loved the most were high in experience and low on tech," Birtwhistle says. "It's the fresh fish in the Hema store, where you can go choose the seafood you want and have it cooked. It's a retail experience that could have been created 15 years ago. ... I think sometimes brands and retailers think they need to go digital, that they need a 'magic mirror' or an augmented reality app, but what they really need to do is create a fantastic customer experience, which may or may not be technology."