Retailer Looks to Facebook to Drive Traffic In Stores

Target is looking to Facebook to drive more foot-traffic in stores. The retailer is launching 700 new offers this week with a social twist: claiming them generates automatic Newsfeed posts on Facebook, unless the user turns them off.

The deals, eventually expected to balloon to about 1,000, are part of the retailer's new digital savings program, built with Facebook and dubbed Cartwheel. The program, with the tagline "A whole new spin on saving," launches in beta mode on Wednesday and gives consumers the opportunity to curate and share deals with friends, as well as redeem deals in store.

For now, the deals will be limited to a percentage off and will only be good in store -- Target is hoping Cartwheel will serve as a traffic driver. That also allows the marketer to offer a variety of deals for groceries, which are only available in store. The program is only available in the U.S. 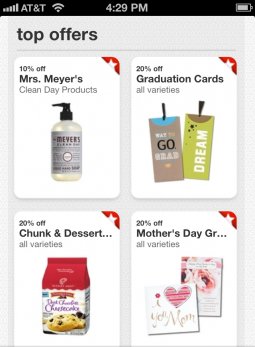 "We're focused on combining digital technology with the in-store experience to bridge those worlds," explained Eddie Baeb, a spokesman for Target, noting the brand began working with Facebook on Cartwheel over a year ago. "We've been partners with Facebook for a while, and it's been a mutual discussion on how to integrate and have a savings program with a social element."

The initiative is faintly similar to Facebook's early commerce foray, Beacon, where users automatically shared their purchases on Facebook. That initiative caused a privacy firestorm, and CEO Mark Zuckerberg ultimately ended the program. Target said the sharing function on Cartwheel can be turned off. (Items like underwear and some personal care products are automatically kept private.)

Brands -- Target says it already has "several dozen" vendor partners -- can also sponsor aggregated lists of offers in the collections section of the site. In the Beta version shared with media last week, Ziploc had a collection titled "Grab & Go Snacks," for example. Multiple activities will also be grouped together, so the redemption of ten deals would generate just one Facebook post with tiles showcasing the brands purchased.

Mr. Baeb said there's no specific demographic Target is trying to reach with Cartwheel, though he expects it will appeal to those consumers who either can't be bothered to clip coupons or tend to forget them at home. He declined to share any specific goals for the launch, but said Target will be watching closely to see how consumers are engaging with the program and how often they come back, as well as monitoring consumer feedback.

Users must have a Facebook account to access Cartwheel, which has a dedicated team of between 35 and 40 Target employees. To start, each user will have the ability to add 10 deals from a variety of Collections -- groupings of offers themed around Mother's Day or spring, for example -- or to search different categories. Deals are typically valid for one month and can be used four times per transaction, as well as multiple times throughout the month. The deals are also stackable with manufacturer's coupons or other offers.

A single unique barcode is generated based on the users' list of deals and can be updated instantly -- if a shopper finds a new deal she wants to add as she approaches the checkout, for instance. The barcodes are simply scanned at checkout. The Cartwheel site itself is Target's first responsive site and works seamlessly on mobile devices. Cartwheel apps for Android and iOS are due out this summer.

As users build their friend lists, they can see deals their friends add or redeem. Users can also earn badges for building lists, redeeming offers or having friends join.

To start, Cartwheel will be promoted via paid Facebook ads, as well as through Target's own channels. Roughly 1,500 people at Target and Facebook headquarters also had access to the program pre-launch and will be encouraged to share it with their friends. Target store employees have also been briefed on the program.