A Google+-centric content strategy is basically unheard of for social marketers, but TD Bank has become an anomaly.

While many brands either repurpose content for Google+ from Facebook because of low engagement on the former or, like Pizza Hut, Visa and Heineken, ignore it outright, TD Bank has chosen to invest in content developed specifically for Google+ in the hopes that it will be visible to users searching for information about their local banking options. 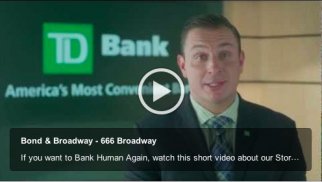 Through its agency iCrossing, TD Bank has produced 96 unique videos to be published on new Google+ local pages for its locations in New York City, featuring on-location footage of the stores and interviews with the managers.

TD Bank CMO Vinoo Vijay noted that TD Bank hasn't created local Facebook pages for its individual stores and had previously mainly confined its efforts in social media to a main corporate Facebook page and Twitter handle. The "Bank Human Again" campaign is an effort to develop content that could be found in searches for neighborhood banks, he said.

"Our ultimate goal is for more consumers to walk into our stores by giving them content that makes the store much more accessible," he said.

TD Bank isn't buying search ads to draw traffic to the Google+ pages, Mr. Vijay said, but the content will also be used in hyper-locally targeted display ads where New York City residents would see the video for their local bank after clicking on the ad.

And while there's no explicit promise from Google about the placement TD Bank's Google+ local pages will have in search rankings compared to results from other location-rich services like a Yelp or a Foursquare, Mr. Vijay says he thinks they will rank prominently based on the effort put into maintaining them.

"If we can make our content more relevant and more interesting, then, in my mind, that can only benefit us from a search perspective," he said.

However, whether brands with brick-and-mortar locations follow suit and develop content to make their pages into destinations may largely be beside the point for Google+ if it's truly a "social layer" for all of Google as executives have asserted and not a traditional social network.

Google reported in a December blog post by senior VP Vic Gundotra -- who referred to Google+ as the "fastest-growing network thingy ever" -- that the platform had 235 million active users, including people who had used socially-enhanced functionality within other Google products, like Hangout video chatting within Gmail.

It also reported that 135 million of those monthly users had visited Google+ web pages and its mobile app, according to the Wall Street Journal, but didn't break out how much time they had spent there.