How Tech Took a Bite Out of the Ad Industry

20 Years Ago, Ex-P&G CEO Saw the Future -- and It Didn't Look So Good
READ THIS NEXT
LinkedIn says it's caught in a 'cat-and-mouse game' of COVID-19 misinformation
Ed Artzt
Credit: Louie Psihoyos/Corbis

When Ed Artzt took the stage at the 4A's annual meeting in 1994, the president-CEO of Procter & Gamble, the country's largest advertiser -- then and now -- delivered a knockout that's still ringing in the ad industry's ears.

His legendary speech, given before the worldwide web had gained any real notice, warned of a future in which consumers would be in control and spurn advertising entirely unless the industry gave them a reason to pay attention.

"If we don't influence [changing technologies] -- and if we don't harness them -- loyalty to our brands could suffer in the long term," Mr. Artzt said. "If user fees replace advertising revenue, we're in serious trouble. New-media suppliers will give consumers what they want and potentially at a price they're willing to pay."
The industry, he said, had to be part of the transformation. "We are going to have to grab technology in the teeth again and make it work for us."

So, two decades after Mr. Artzt sounded the alarm with his startlingly prescient speech, how has the industry done? You can barely make out the teeth marks.

Artzt's predictions: How did he do?
Even before the web, Google or iPhone, he nailed most of it

When ex-Procter & Gamble Chairman-CEO Ed Artzt laid out the threats to ad-supported media in 1994 -- years before the web was popular and the DVR, the iPad, iPhone, Google and YouTube were even around -- he made plenty of predictions, and most came true in broad measure. Here are five from his speech and what has since transpired.

If advertising is no longer needed to pay most of the cost of home entertainment, then advertisers like us will have a hard time achieving the reach and frequency we need.

Advertising is still needed to pay the cost of home entertainment, but by some measures it pays for less than half in developed countries like the U.S. P&G has increasingly turned to lower-cost digital alternatives to get the reach and frequency it needs.

Remote controls … will be replaced by program-navigational services that will fundamentally change the dynamics of TV viewing. These "navigators" will be heavily marketed subscription services. They'll tell viewers what's on tonight -- and more. They'll know what kinds of programs a viewer likes. They'll even remember everything a viewer has watched.

Pretty much wrote the design brief for TiVo there.

If advertising is shifted along with the program, and people don't have the option to zap, that could create an even larger audience than a single showing can hope to achieve.

We can target not just demographic segments but individual households. If a family has a newborn baby, we can make sure they get a Pampers commercial.

Not so much through interactive TV commercials Mr. Artzt envisioned at the time, but far more so through the collection of such tools as the programmatic digital-ad buys, brand websites and digital content Pampers uses today.

The best content: ad-free
While 35% of content was viewed without ads through subscription services in 1994, today it's 60% to 65%, said Rishad Tobaccowala, chairman of Publicis Groupe's DigitasLBi and Razorfish. For $60 a month, people are paying for access to "the best content in the world without ever seeing an ad," he said, totaling the cost of subscribing to Netflix, HBO, Showtime, Hulu and Spotify or Pandora.

If anything, technology has advertising in its teeth, keeps shaking it, and won't let go. Even the tech giants who do more to shape the industry than anyone else -- Google and Facebook (which notably didn't exist 20 years ago) -- keep struggling to find formats that work both for consumers and advertisers, who are left serving ignorable pre-roll, blending into other content with native ads or creating branded entertainment to stay in the game. That they haven't fully succeeded means ad dollars haven't just shifted, they've gotten less important in the broader economy.

After a brief dot-com-fueled rise from 1994 to 2000, ad spending as a share of gross domestic product fell for a decade and hasn't rebounded from the 2007-2009 recession either in North America or globally, according to Zenith Optimedia.

Measurement has barely improved. It's difficult to assign any value to banner ads -- 99% of them don't get clicked, and until March of this year, when the Media Rating Council accredited a minimalist viewability standard, there was no yardstick for those that do. Digital advertisers are applying the same statistical sampling concept they used for TV deals in 1994, based on Nielsen and ComScore, despite evidence that purchase and other behavioral data predict ad response much better.

TV is still king, but it's expensive: Its cost per gross-rating-point to reach 18-to-49-year-olds has quadrupled in the past two decades, according to Horizon Media, and its reach has been diluted by the proliferation of other media.

The media world has evolved into a place where the "haves" most prized by advertisers can easily avoid ads, while the "have-nots" can't, said Mr. Tobaccowala.

Mr. Artzt, today retired and splitting his time between Jackson Hole, Wyo.; Naples, Fla.; and New York City, calls some digital advertising "an abomination," pointing to video ads that automatically play whether he wants them or not. "That's going to die of its own weight because it's so irritating."

Outmoded measures
Mr. Artzt's warning went largely unheeded by marketing managers responsible for delivering results in the next quarter, never mind the next millennium, and advertising agencies looking out for themselves. "What concerned me at first is that [the speech] was followed by a lot of cash-outs in the agency business," said Mr. Artzt in a recent interview, "and agencies that were merged or swallowed up, much of it going overseas. Apparently there was a willingness to turn this threat of what do we do about the future over to bigger entities."

The immediate response was a task force. Within five months of Mr. Artzt's speech,
O. Burtch Drake, then president of the 4A's, helped establish the Coalition for Advertising Supported Information and Entertainment. Within a year, CASIE had created the internet's first privacy standards and winnowed the number of ad units to 16 from 250.

But the coalition's ad-viewability standard took two decades. The standard -- which holds that at least 50% of an ad's pixels must be viewable for at least a second to count as an impression -- is being implemented by ComScore and Nielsen. It is intended to put measurement of internet audiences on a plane similar to that of TV audiences. But even that's becoming outmoded by programmatic-ad buying, which evaluates ad placements based on how they move the needle on sales or other measures of consumer response, regardless of viewability.

Last year, P&G's current chairman-CEO, A.G. Lafley, said as much as a third of his brands' marketing budgets in markets like the U.S. are spent on digital. A big factor driving that shift has been the lower cost of digital advertising.

Power to the consumer
Speaking today, Mr. Artzt said he believes the central goal of preserving a place for advertising-supported entertainment and information was achieved. "The whole ad industry really got on top of the issue," he said. 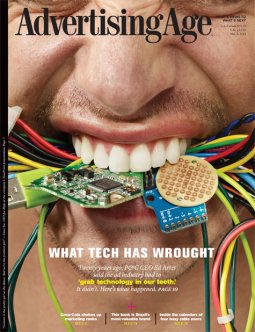 More From the
Current Issue

But grabbing technology in the teeth, as Mr. Artzt said in his call to action, "isn't going to be as simple as it was to adapt to radio or TV, where everything favored the advertiser." And he was proved right.

"You have to follow the consumer, who has all the power," said P&G Global Brand Building Officer Marc Pritchard. "We're trying to make sure our content is really tailored toward the brand promise and the people find it interesting as opposed to creating the entertainment content we did in the past," he said.

"Marketers, agencies and everyone else now have to think of new ways of engaging with people," said Mr. Tobaccowala. Advertising must be more proactive, with brands offering consumers utility and services. "It's not one of those things where [advertising] dies," Mr. Tobaccowala said. "But the old ways will matter less."

"We'll have a whole bag of tools to inform consumers, and if we do that right, we can keep people in their seats when the commercials come on," said Mr. Artzt in his seminal speech.

But two decades later, their attention is straying more than ever.