Ever since Thrillist - the young guy's lifestyle email company - bought the men's apparel site JackThreads almost three years ago, Thrillist Media Group CEO Ben Lerer has promoted the idea that the future of media is to integrate it with commerce. Nice in theory, but in practice the synergies have been elusive.

Yes, JackThreads is doing just fine, finishing 2012 with about $40 million in revenue, Mr. Lerer said. And the business models are complementary - pairing a steady, high-margin one (media) with a fast-growing, low-margin one (commerce). Yet the company hasn't fulfilled the promise of meshing commerce into the content experience in a way that would make it easier for Thrillist readers to buy stuff that they're reading about, or shoppers at Jack Threads to read related content. 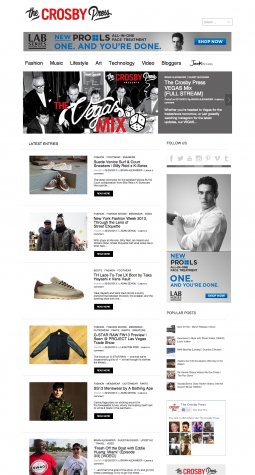 Mr. Lerer is now betting that the launch of its second media property, The Crosby Press, will help accomplish that commerce-content integration without forcing it on Thrillist readers initially. While Thrillist caters to men in their mid to late 20s interested in travel, food and drink, The Crosby Press is targeting younger guys -- 18- to 24-year-olds -- who live a different lifestyle with music, extreme sports, and fashion at the core. Essentially, Crosby Press is tasked with producing content that the core Jackthreads customer wants to read.

The site has been live in "beta" since November, but JackThreads will start promoting it to its subscribers this week. Lab Series Skincare for Men is the launch advertiser.

"You need to make it so the experience for the user is actually elevated," Mr. Lerer said. "So you go and read a truly editorial article about some awesome designer, or a really good product, and then within that experience, you can go and buy the way you did at JackThreads yesterday."

The commerce integration will undoubtedly raise the question of whether Crosby Press writers and editors will feel pressure to feature designers or trends related to Jackthreads sales. Mr. Lerer said they have no personal incentive to do so and have the editorial freedom to cover what they choose to. But since the target reader is "the JackThreads guy," he expects natural overlap.

So what's the sell to advertisers?

The launch of The Crosby Press caps off a hectic seven months at the company. In August, Thrillist Media Group raised $13 million in a Series A funding round. In that time, it has also parted ways with several senior execs. Two of them -- the company's president and head of sales - were gone less than a year after they were hired. Mr. Lerer said he will not be hiring a new president, and will instead oversee all product strategy himself.

"Whether or not I am going to be best person to run product here, I'm going to run product here for the time being," Mr. Lerer said in an interview last month. "Because right now I can close my eyes and I know what I want it to look like six months or a year from now...and I just feel like I can add a lot of value."

The company also killed its attempt at a deals business, Thrillist Rewards, because it wasn't growing fast enough and margins were too small, Mr. Lerer said. In its place, the company will look to throw more of its own local events that it operates itself.