How's this for a daily deal: half off a steak dinner at Roberts', the steak house inside the Scores gentlemen's club on Manhattan's West Side -- premium cocktail and lap dance included. That was a recent offer from Thrillist, the website and email newsletter for guys that , like a lot of media outlets, is casting a jealous eye on Groupon territory. 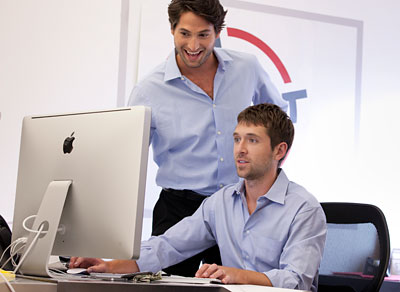 Unlike some daily-deal entrants from the media sector, however, Thrillist has a distinct editorial voice to project and protect. So its rewards deals have to fit with the Thrillist ethos, meaning an early opening to a beer tasting or a special prix fix menu that includes three martinis.

And because Thrillist founders Ben Lerer and Adam Rich wouldn't send their "guys," as they call them, into a strip joint waving a printed-out coupon, they made sure the names of those who bought the deal were placed discretely at the door. Where coupons are required, they include instructions to discretely fold them to hand to a maitre d'.

Luckily the Thrillist voice allows its "curators," the people who source the deals, to hand out versions of the etiquette tips that have become de rigueur for the daily deal space. One coupon for a "boozy dinner" reminds: "You're getting a sick deal so be sure you tip on the full value, you cheap bastard."

Rewards is the latest business grafted onto the Thrillist brand, a daily newsletter and website for young professional men founded by college buddies Messrs. Lerer and Rich in 2005. Mr. Lerer calls Thrillist a media company and sees himself as a publisher; his partner Mr. Rich is editor in chief. It produces one piece of editorial in each of 19 cities each day -- as well as one national newsletter -- all geared to help guys decide what to do with their leisure time and disposable income.

This is not high-concept journalism wrapped in display advertising, the model that built huge men's brands like Esquire, GQ or even Playboy. You won't find Thrillist taking a star away from famed Manhattan sushi shrine Masa, which The New York Times did earlier this week. In fact, Thrillist isn't in the business of saying anything negative about the businesses it covers. Its philosophy: "We're not going to waste our time or yours with things that suck -- you already have your job for that ."

Journalistic takes on Thrillist tend to dwell on its style of editorial, the blurring between content and commerce. Is that an ad? Is it an article? It can be hard to tell the difference. But while Mr. Lerer makes it clear the company was conceived from the start with separation in mind -- Mr. Lerer handles the business, Mr. Rich the editorial -- the old rules for media and advertising also seem to be making less sense, and less money.

Causing old media discomfort is a bit of a family tradition for Mr. Lerer. His father, Ken Lerer, is a co-founder of The Huffington Post. For the younger Mr. Lerer, a media company has a relationship with consumers through content. That content might be traditional editorial, it might be journalism, but it just as well might be shopping. With 83 million subscribers, is Groupon a media company? Maybe.

"The line has been blurring between advertising and editorial for some time," said Antony Young, CEO of Optimedia, a unit of Publicis Groupe . "Advertorials, sponsored content, branded entertainment or earned media programs are all seeing increased interest by marketers. This is based on a simple idea: that direct advertising, while powerful, has lost some of its impact."

Not every media brand, however, has the freedom to explore new boundaries, said Brandon Berger, chief digital officer at Ogilvy. "A brand like Thrillist can do it," he said. "Other brands may be challenged."

But even nontraditional approaches rely entirely on advertisers for revenue. By 2010, Mr. Lerer was exploring the limits of his newsletter-based company, as Thrillist grew like a media company: slowly. He had built a version of Daily Candy, the business to which Thrillist is most often compared (Bob Pittman invested in both). It had a million subscribers, 35 employees and less than $10 million in annual revenue. Mr. Lerer was looking for a way build the audience and earn additional revenue from them with something other than advertising.

Mr. Lerer had some evidence that Thrillist's "guys" might like to buy stuff, so he explored doing affiliate deals with online retailers like Gilt Groupe. "We had a fiduciary responsibility to investors to build asset value," he said. "Being an affiliate would be valuable but we didn't feel we would be capturing the whole value of our users."

Thrillist ended up buying a tiny, undercapitalized, Columbus, Ohio-based e-commerce outfit, Jack Threads. Said Mr. Lerer: "Jack Threads was the litmus test . Will our guys buy? Will they transact directly with us?" Well, yes. So: "What else can we curate for them?"

By then, Groupon, Living Social and quite a few clones were making a lot of noise in the local ad market. Because Thrillist never covers a restaurant, club or other establishment it's not raving about, those restaurants, clubs and other establishments tend to want to do business with Thrillist. But because Thrillist really only covers an establishment when it is launching or around some other event of significance, most businesses never see themselves editorially "covered" more than the once.

What if Thrillist could sell them on a deal? Mr. Lerer said he looked around at the burgeoning deal market. "I was kicking myself. Why didn't we do that ? I thought, 'Congrats Groupon, you win.'"

Then again: "We don't have the same audience and don't want to build the same business. We never had a model for local ad dollars. We took some of the learning from their formula and created our own business."

Thrillist's "rewards" (don't call them "deals" or "coupons") are complicated and take a lot of legwork. Generally the sell is not so much a discount, but a unique experience that Thrillist users are willing to pay for. Each deal is a revenue share between Thrillist and the local establishment, such as $55 for sushi and sake at Omakase -- samurai sword lesson included. (Thrillist sold 15,000 of the steak-and-stripper deal.)

"Rule one: Gluttony is good," Mr. Lerer said. "Guys respond well to all-you-can-eat or -drink. When we push the limit on adventurous eating or adventurous drinking, guys like it."

What Mr. Lerer does know is that commerce is increasingly what makes Thrillist tick. A year after the Jack Threads deal, headcount is over 100. Two and a half million people subscribe to the newsletters; annual sales are expected between $40 million and $50 million. Without Jack Threads -- as just a media company -- Thrillist's revenue would have been $20 million, Mr. Lerer said.

What's next? Well, first both Mr. Lerer, 29, and Mr. Rich, 31, are cruising toward the wrong side of 30. Mr. Lerer is married; Mr. Rich, engaged. Mr. Lerer is starting to think about how the platform they've built -- content, commerce, deals -- could apply to other media brands. Right now, a subscriber is worth about $20 a year to Thrillist in commerce, advertising and deals. "We think about the lifetime value of one person in the Thrillist world," he said. "By having multiple channels for them to interact we are able to make that user more valuable than other media companies can."