The Federal Communications Commission today adopted "net-neutrality" rules that would prohibit companies such as Verizon and Comcast from blocking or slowing online traffic and from offering faster service in return for payment. 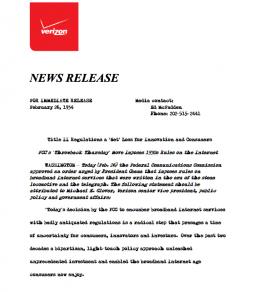 To make its point crystal clear, the press release is crafted to look like it was typed on a manual typewriter and says the FCC is imposing rules "on broadband Internet services that were written in the era of the steam locomotive and the telegraph." Verizon VP-Public Policy and Government Affairs Michael E. Glover goes on to say that "today's decision by the FCC to encumber broadband Internet services with badly antiquated regulations is a radical step that presages a time of uncertainty for consumers, innovators and investors."

Click on the image at left to read the whole thing.

This won't be the last we hear from the company. Verizon brought the lawsuit that upended the FCC's last net neutrality rules.

And if the typewriter stunt isn't old-timey enough for you, Verizon also posted a press-release written in morse code to its blog.

Why brands should work with more deaf and disabled talent