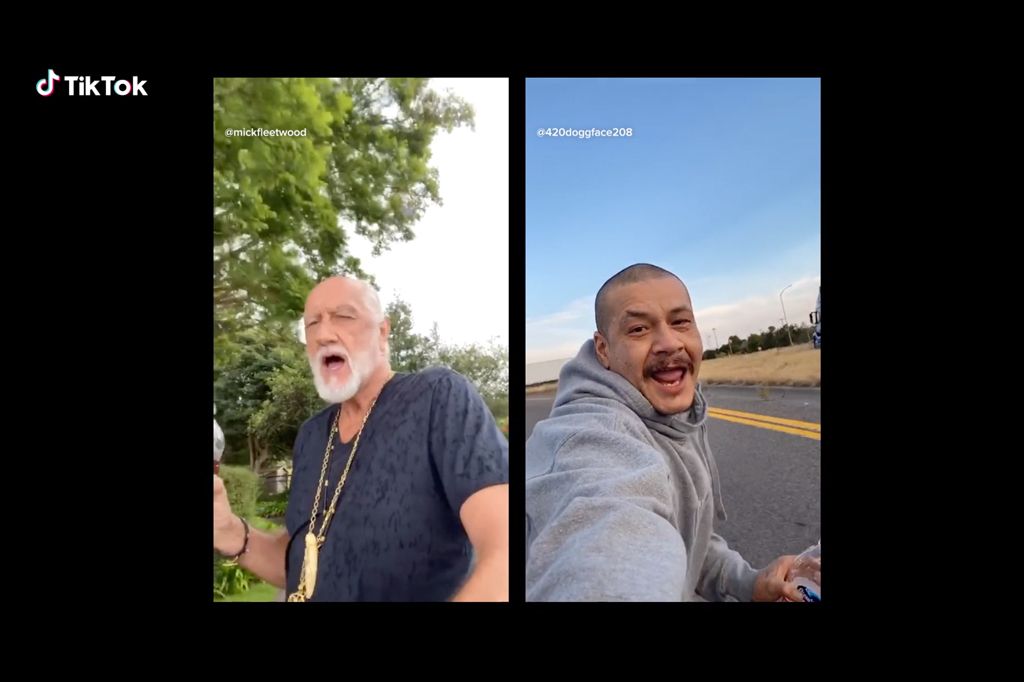 TikTok made a TV commercial from the Ocean Spray-Fleetwood Mac crossover video that became a viral hit, and it ran during Major League Baseball’s Playoffs on Thursday (watch the ad below).

The new 15-second spot highlights the original video from Nathan Apodaca, known as 420doggface208 on TikTok, who filmed himself sipping Ocean Spray while skateboarding and grooving to Fleetwood Mac’s “Dreams.” The TikTok video inspired a ton of knockoffs on social media, and now TikTok has taken it a step further, incorporating the feel-good vibes into its latest marketing campaign.

The TV commercial features the original TikTok video with flashes of a few of the copycats around Apodaca’s version. It was produced by the marketing agency Known, which TikTok hired this year. Known also helped create TikTok’s latest global marketing campaign, called “It Starts on TikTok,” which was meant to highlight all the ways the service impacts culture. The Ocean Spray-Fleetwood Mac video certainly did that.

Fleetwood Mac’s 1977 hit “Dreams” hit No. 1 on iTunes after Apodaca’s homage to the song went viral last week. Ocean Spray jumped on the attention from the video, too, and gave Apodaca a truck as part of a promotion after he made their juice more famous than it’s been in decades.

Now, TikTok wants to highlight its contribution as being the platform that brought it all together. The TV commercial was set to run during MLB playoff games and the National Basketball Association's Finals, as well as through digital channels, according to Known. The ad continues a streak of invaluable media attention for Ocean Spray, which is an agricultural cooperative owned by more than 700 cranberry growers in the United States, Canada and Chile.

TikTok could use the goodwill. The social video platform is in a fight with the U.S. government after President Donald Trump labeled it a national security threat because it is owned by Chinese-based ByteDance.

Related articles
Ocean Spray seizes on viral TikTok video, gifts its star a truck and some juice
E.J. Schultz
TikTok deal likely to drag on beyond the election
What the TikTok ban means for brands
Garett Sloane
Here's TikTok's new ad campaign: A love letter to its community as it faces attacks
Garett Sloane

Trump signed orders forcing app stores to stop supporting TikTok in the U.S., and is trying to compel it to sell to a U.S. owner. The fight is now in U.S. courts. On Thursday, the Trump administration’s Department of Justice filed its latest motion to enforce the penalties against TikTok, since a judge sided with the company postponing a ban. The argument could drag out past the November presidential election.

In the meantime, TikTok has found a new anthem in Fleetwood Mac’s serene ballad: “Now here you go again, You say you want your freedom, Well, who am I to keep you down.”

TikTok’s head of global marketing Nick Tran was just named to Ad Age's 40 Under 40 for his role in shaping the use of social media over the years at brands like Taco Bell and Hulu. Tran joined TikTok earlier this year.

The new TV commercial comes with a disclaimer, warning viewers not to try the skateboard stunt as “personal injury may result.” But if a person does feel the need to film themselves on a skateboard drinking juice and swaying to the music, well, they just might win a truck and a starring role in a commercial.