Would You Put a Banner For a Kids' Ski Camp in This Story?
READ THIS NEXT
Major League Baseball is the latest brand to recruit TikTok ambassadors

It seems like the entire media world has been applauding The New York Times today for its breathtaking online feature about skiers and snowboarders caught in a lethal avalanche in Washington last February.

Beyond a great narrative, the article's design and multimedia execution could help set a new bar for what visual storytelling can and should be on the web.

Unfortunately, that doesn't extend to the ad experience, where The Times has been serving standard web banners that disrupt The Times' spectacular edit layout. What's worse, The Times (and Google) keep showing terrible ads given the content. This reporter was shown an ad for a ski camp for kids amid a story about sudden death on a powdery mountain slope: 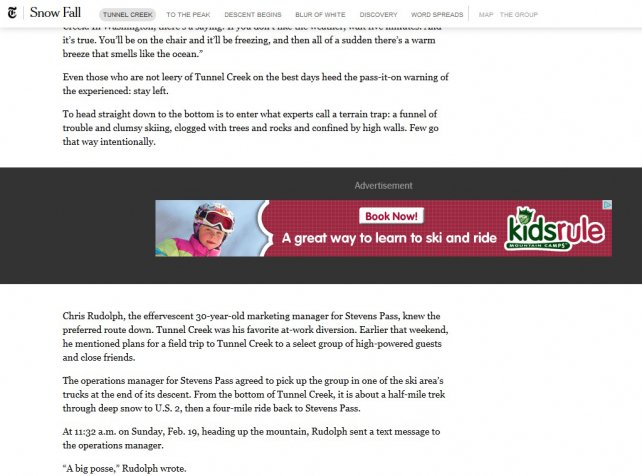 Later we saw an ad for an online ski and snowboard shop -- perhaps not a bad juxtaposition, considering that the story will probably be widely read by committed skiers and snowboarders.

Still, the carefully packaged report could have been a great opportunity for The Times to experiment with advertising as compelling as the visual environment. Or, if that wasn't possible, the paper could have left advertising out of a project like this, since they appear to be placing low-value network ads there that aren't adding much value anyway. Instead, it gave us a much worse third option: terrible ads interrupting a fantastic experience.

We've emailed and called The Times for comment and will update if we get a response.