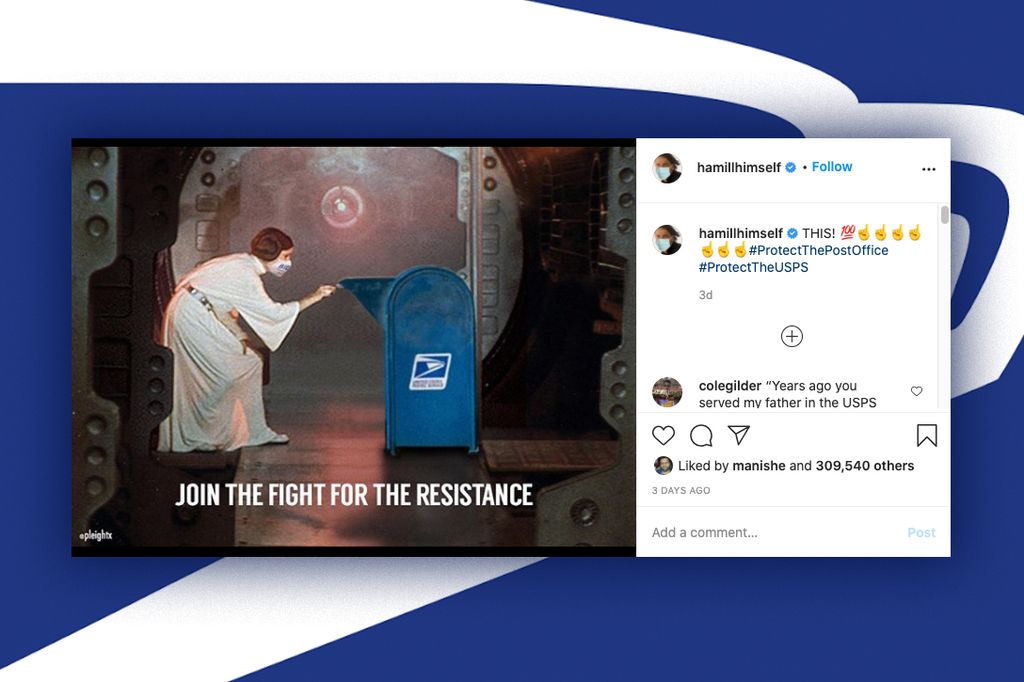 Stamp of approval from Mark Hamill.

Only a few months ahead of the 2020 presidential election, the U.S. Postal Service is in an unthinkable position where it has to convince Americans that its mail-in voting system is functioning correctly.

Trepidation over the USPS started earlier this month after changes implemented by Postmaster General Louis DeJoy, a known Trump donor, caused postal service workers to speak out about delivery days.

It was enough for anxiety to set in and Americans to cast blame on DeJoy and the Trump administration for conspiring against mail-in voting, a process which has become more critical this year due to the pandemic. This week, Trump then said he was opposed to new funding for the USPS. Across social media, users have been sharing “Save the post office” memes and are advocating people to send mail, postcards, stamps …anything to support it.

“Today, we are actively helping the organization to communicate to the public its absolute commitment to fulfilling the important role of the Postal Service in America’s electoral process through the timely processing and delivery of the nation’s election mail,” the spokesperson states.

The Postal Service has put out a statement from DeJoy stating that any changes will be made after the election and, according to CNN, DeJoy is planning on recording a PSA that will air on TV starting in September. On Friday, DeJoy testified before the US Senate and said USPS is committed to delivering mail ballots on time and securely.

But the job isn’t falling solely on Weber Shandwick. Along with the support of concerned citizens, the brand is also getting plenty of backing from celebrities. “Star Wars” star Mark Hamill urges his fans to “join the fight for the resistance,” Tom Hanks declares “We will vote,” and Cher even wants to work for them. Famous TV mailmen from shows like “Cheers” and “This is Us” are also weighing in.

OK,Called 2 post offices In Malibu.They were polite.
I Said”Hi This Is Cher,& I Would like to know If you ever take Volunteers⁉️Lady Said She Didn’t Know & Gave Me # Of Supervisor.I Called & Said Hi This is Cher Do U Accept volunteers.”NO,Need
Fingerprints & Background Check”😥

Donald Trump’s ineffective leadership gravely worsened the crisis that we are in and he is now taking advantage of it to subvert and destroy our right to vote and vote safely. Request a ballot early. Vote early.

Since the President is crippling the Postal Service because he knows Americans don't want to vote for him, here are some alternatives. Research the options in your state and vote as early as you can. https://t.co/iY4u8N7SDd

The @USPS is critical to this year’s elections. We need mail-in ballots to be delivered, so that we have fair elections. Congress must act to save the #USPostalService NOW! https://t.co/yqnKm1QJHp pic.twitter.com/qorwbUoTWj

Bill Chott (mailman on NBC’s “This is Us”)

An important message from none other than Cliff Clavin (@dratzenberger) himself, asking us all to help keep @usps in business!! (thank you for your service, Mr. Ratzenberger) #SaveUSPS #USPS pic.twitter.com/bbS43gNcIP

The U.S. Congress is making critical decisions about the future of the #USPostalService and it now faces an existential threat. Please join me in fighting back. Go to https://t.co/h3KSsb5dqu to get involved now!