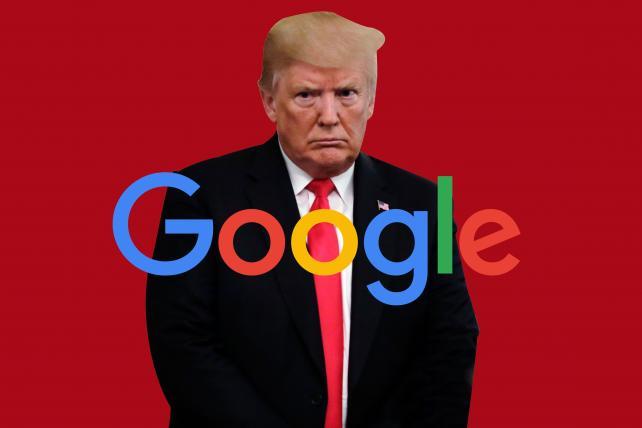 President Donald Trump's call for action against Google and other internet companies over the way they display news is likely to run up against a hard fact: there may be little he or Congress can do.

The government has few means to dictate to publishers and online curators what news to present though executives from the companies are sure to be questioned on that when they appear before Congress next week to discuss their efforts to prevent Russian election meddling.

"From a standpoint of regulating content, there's immediately a gigantic First Amendment problem for any effort," said Larry Downes, project director at the Georgetown Center for Business and Public Policy.

Trump claimed on Tuesday without providing evidence that Google's news search function favored liberal over conservative outlets, tweeting that "This is a very serious situation-will be addressed!" Later, in a meeting in the Oval Office, he told reporters that Alphabet's Google, Facebook Inc. and Twitter Inc. "are treading on very, very troubled territory."

Trump returned to the theme Wednesday, asserting to reporters at the White House that the three technology companies "are really trying to silence a very large part of this country."

"It's not right, it's not fair, it may not be legal," Trump added. Asked if he wanted to impose new regulations on technology companies, he responded, "We're just going to see. You know what we want? Not regulation, we want fairness."

Experts say it's unclear what he or Congress could do to influence how internet companies distribute online news. The industry has an exemption from liability for the content users write. Some top members of Congress have suggested limiting that protection as a response to allegations of bias and other misdeeds, although there have been few moves to do so since Congress curbed the shield for some cases of sex trafficking earlier in the year.

Trump has talked about expanding libel laws and mused about reinstating long-ended rules requiring broadcasters to offer equal time for opposing views, which didn't apply to the internet. Neither has resulted in a serious policy push.

Downes said that it's possible the Federal Trade Commission could use its authority over deceptive practices to examine the company's statements that it doesn't skew its results based on politics. Such an inquiry, though, would require a "charitable" evaluation of the government's powers, he said, noting Trump is not supposed to interfere in the independent agency.

Google may hear more about the issue alongside executives from Facebook and Twitter at a hearing on Russian election meddling on Sept. 5. The company intended to send Senior Vice President for Global Affairs Kent Walker to testify, but the panel's chairman, Senator Richard Burr of North Carolina, who wanted Chief Executive Officer Sundar Pichai, has rejected Walker.

The accusation of bias, dismissed by online search experts, follows the president's Aug. 24 statement that social media "giants" are "silencing millions of people." Such allegations -- along with assertions that the news media and Special Counsel Robert Mueller's investigation are arrayed against him -- have been a chief Trump talking point meant to appeal to his base.

Trump's re-election campaign texted the president's tweets to supporters, writing as part of an end-of-month fundraising push that "The FAKE NEWS machine is completely out of control."

Google issued a statement saying its searches are designed to give users relevant answers. "Search is not used to set a political agenda and we don't bias our results toward any political ideology," the statement said. Twitter has said that any allegations of anti-conservative bias are unfounded.

Facebook declined to comment on Trump's statements but pointed to actions it has taken in recent years to guard against bias in its feeds, including hiring a retired Republican senator to perform an internal review.