These Are the TV Shows More Popular Among Cord-Cutters

Cord-Cutters More Likely to Visit NBC.com Than Average Internet User, Per Experian Survey
READ THIS NEXT
Amazon launches campaign for its ads business telling brands it's more than e-commerce

People who cancel their cable TV subscriptions may not miss their monthly bills, but they're also not missing out on some of their favorite broadcast shows.

These so-called cord-cutters are more likely than the average internet user to watch ABC programs like "Jimmy Kimmel Live" and "Modern Family" and Fox's animated series online, according to a survey conducted by Experian Marketing Services.

All fifteen of the shows with higher-than-average popularity among cord-cutters are broadcast programs that could be watched on traditional TV without a cable or satellite subscription (internet-only shows like "House of Cards" weren't measured). However the programs' popularity may have as much to do with their broad distribution strategy as with their over-the-air availability.

People didn't have to watch a full episode of a show for it to register on the list. Clips also count, which could explain why programs that post a lot of clips online and are socially active -- like "Jimmy Kimmel Live," which counts more than 4 million subscribers to its YouTube channel -- rank so high. The late-night show's "Worst Twerk Fail Ever" video has been watched more than 19 million times on YouTube.

"If it's shareable or consumable in short clips, I think it's going to appeal to the cord-cutter audience because they're hungrier for video here and there," said John Fetto, Experian's senior analyst on marketing services and consumer insights. 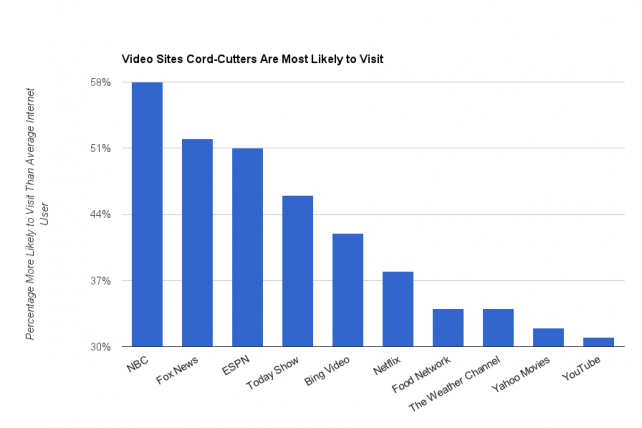 But Hulu and Netflix are far from the only places cord-cutters are going for their TV fix. In fact cord-cutters are more likely than the average internet user to visit some TV networks' websites than they are to check out Netflix or YouTube, Experian found.

NBC.com topped the list of online video sites cord-cutters are more inclined than most to visit. Fox News' and ESPN's sites followed, but those visits may be as much about news as video. NBC's "Today" site and Bing Video rounded out the top five. All five sites edged out Netflix and YouTube, but that seems be because the two video services' are pretty popular among cable subscribers as well as cord-cutters. Netflix and YouTube combine to account for half of the country's web traffic.

But aside from NBC and Bing Video, those visits may be as much about checking out the latest news as they are watching video. ESPN's ranking is "certainly driven by cord-cutters who still need to get their sports fix somewhere," Mr. Fetto said.

Sports has long been considered cable and satellite providers' biggest protection against cord-cutting. But while the NFL is often cited as the most valuable deterrent, that label should actually go to the NBA. People who are "very interested" in the NFL are 23% less likely to cancel their cable subscriptions, but those "very interested" in the NBA are 40% less likely, according to Experian. College football indexed at 21%, trailed by Major League Baseball at 20%.