At a press meeting today at the company's San Francisco headquarters, Twitter CEO Dick Costolo presented a barrage of data suggesting that the micro-blogging platform is broadening its user base. Contrary to stereotype, almost half of active users just lurk, and don't tweet. 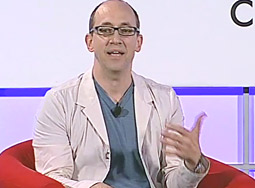 Mr. Costolo told the group that 230 million tweets are now being sent daily -- up from 110% at the beginning of the year.

He also said that Twitter.com (which doesn't include third-party services like TweetDeck) now gets 400 million monthly unique visitors -- up 70% since the beginning of the year.

But according to ComScore, Twitter.com had just 150 million unique visitors in July. According to ComScore spokesman Andrew Lipsman, Twitter's use of web analytics that count unique cookies could account for the discrepancy. Twitter.com may generate a greater number of cookies per person on average since users are more apt "to access from both home and work and mobile and maybe even use multiple browsers," he said, via email.