While Facebook looks to calm jittery investors about its ability to monetize mobile traffic, Twitter is proudly telling the world that its ad revenue is scaling as its users go mobile. 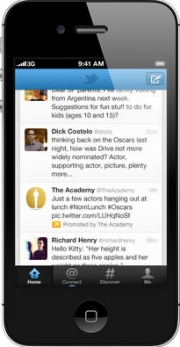 In an interview at an event thrown by The Economist yesterday, Twitter CEO Dick Costolo said that the company's mobile-ad revenue had exceeded ad revenue from desktop users for the first time in a single day within the last few weeks. It's a major step for Twitter's ad business, which announced the rollout of mobile ads on its official iPhone and Android in February.

Twitter subsequently introduced the capability for advertisers to target promoted tweets to specific platforms -- be it iOS, Android, or BlackBerry devices or Twitter.com desktop users.

Like Facebook, Twitter is under mounting pressure to crack the code on mobile, since 60% of its users are accessing the platform through a mobile device (up from 55% six months ago). But in one key respect, Twitter has an easier task since its core ad offering, the promoted tweet, was simply repurposed for mobile. Facebook, on the other hand, had to figure out an ad unit to use that didn't disrupt the user experience on a smaller screen, resulting in "sponsored stories" in user news feeds that are still mostly an unknown quantity in terms of their effectiveness.

According to Mr. Costolo, clicks on Twitter's mobile ads are higher, perhaps owing to the fact that more Twitter power users are there. The average Twitter.com desktop user spent 21 minutes on the site in March, compared with 114 minutes spent by mobile users on Twitter's official apps and using the mobile web, according to ComScore.

"We've also noticed just as our mobile users are more active than our non-mobile users, the engagement rates on ads on mobile are much better than they are on non-mobile platforms," he told The Economist's Tom Standage.

Twitter's mobile ads still are only appearing on its official apps (as well as its mobile site) and aren't being served to users of third-party apps like UberSocial, TweetCaster and Echofon, who might be seeing ads served by a company like 140Proof. However, Twitter has been syndicating ads to Hootsuite since 2010, which suggests a direction it could take to monetize usage on other third parties.