Twitter is attempting to deepen its links to TV -- as well as skim TV ad budgets -- with a series of new media deals and technology to target ads at TV viewers.

Twitter's ad pitch has been consistent over the past year: advertising on Twitter in conjunction with TV makes TV ads more effective. "Our perspective is everybody in digital has it wrong; they have ben going to market with an either-or proposition," said Twitter global head of revenue Adam Bain. Twitter is a bridge to these different screens and experiences."

Today, at an Internet Week event, the company unveiled a series of media deals and a targeting tool designed to bring TV advertisers on to Twitter. Twitter already has partnerships with ESPN, Turner Sports and the NBA to distribute video clips; today it announced a host of new partners including A&E, Clear Channel, Conde Nast, Vevo, Major League Baseball, WWE, Vice and others.

These deals add content to Twitter's stream, but also video ad revenue. Mr. Bain said that revenue on the short video ads -- they average 6 seconds -- is split between the owner of the content, the distributor and Twitter. In the case of a Ford ad on a college football clip, the revenue would be shared between the NCAA, ESPN Twitter.

In addition to media deals, Twitter showed showed off some early fruit of its acquisition of social TV analytics startup Bluefin Labs. The company uses semantic technology to match conversation on Twitter with specific shows on TV; how Twitter is using that technology to target ads at people who have watched a show, and likely, the ads. 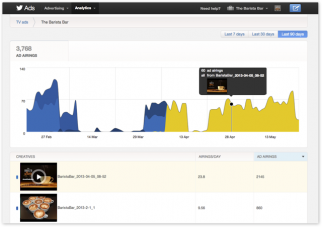 "We're using the public signal that you're talking about a show," said Bluefin co-founder and now chief media scientist at Twitter. "Then there's an assumption -- that we are finding is a good one -- that if you are watching or tweeting about a show that you also saw the ad."

The sell here is to allow TV advertisers -- already spending a lot on their TV spots -- to message those consumers again. Twitter is also targeting past viewers of shows on the assumption that if they've watched a show in the past, they might be watching again, even if they're not posting about it.

Twitter made its latest TV-plus-Twitter pitch in front of a room of advertisers and its new media partners. Adam Shlachter, senior-VP media at Digitas, said the idea of using Twitter "to bridge from programming to the conversation is compelling."

But there are limitations; namely, that the population of those on Twitter while watching TV is still a subset of viewers. Twitter estimates that 32 million people in the U.S. posted on Twitter about TV at some point last year. "It can work really well targeting consumers using Twitter as an extension of TV, but it is not representative of everyone watching TV," Mr. Shlachter said.

Twitter is expected to earn $582.8 million in global ad revenue in 2013, and will approach $1 billion in 2014, according to an eMarketer estimate.