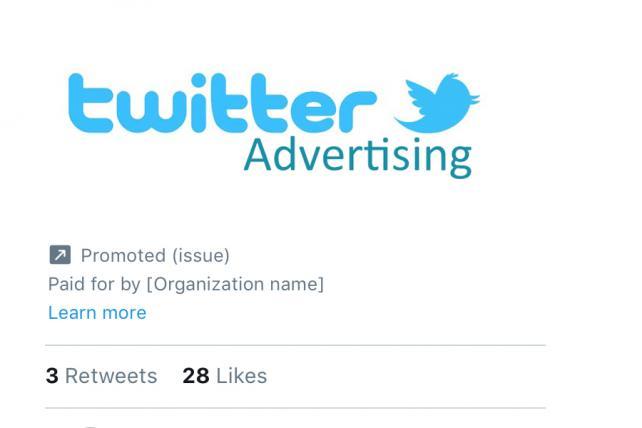 Twitter will label ads if they touch on political issues.
Credit:

Twitter has given news organizations a pass from its new rules on issues-based advertising, which means publishers like The New York Times and USA Today won't have to register as political advertisers.

On Thursday, Twitter announced its new policies on issues-based ads, elaborating on policies for political ads that instituted in June. They force advertisers to prove their identities and locations before buying ads that relate to politically charged topics like civil rights, immigration and guns.

Twitter spared media those extra steps, however, even if they promote tweets with links to news stories that could touch on those hot issues. Also, ads from the news companies won't need any special "political" or "issues" ad label.

News organizations have complained that similar rules recently implemented on Facebook did not differentiate between promoting journalistic reporting and advocating for candidates or causes.

Publishers were particularly concerned because Facebook also planned to put their ads in its new political ad archive alongside ads from political organizations, potentially eroding consumers' distinction between legitimate journalism and advocacy.

Facebook eventually changed its archive policy to display ads form news organizations under a category of their own apart from political ads.

Not just any news publisher gets a pass from Twitter, however: A publisher needs to have at least 200,000 unique visitors a month in the U.S., among other technical requirements.

Twitter, Facebook and Google have all been developing new ways of handling political ads since the 2016 election, when all the platforms were abused by bad actors spreading disinformation, including through paid posts. The platforms are all changing the rules on who gets to place political ads and what information the public gets to see about them.

Twitter will show information on political and issues ads about how much they cost, who bought them and what audience was targeted to receive the ad. Facebook shows similar information in its political ads archive.