Twitter Taking a Different Approach to Advertising on Vine and Periscope

No Force-Fed Ads, at Least for now
READ THIS NEXT
WhatsApp delays updated privacy policy after user confusion, backlash

Twitter's plan to make money from Vine and Periscope looks a lot different from the strategy it's pursuing with its core product.

Neither video platform will feature traditional, force-fed advertising, at least in the near term, according to Joel Lunenfeld, Twitter's VP-global brand strategy. Instead, Twitter is working with brands to promote content from these platforms within its core product, and serving as a middleman between brands and stars with major social followings. 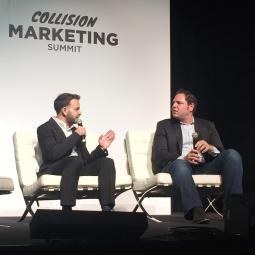 Twitter's Joel Lunenfeld on stage at Collision this week

"As of right now we don't have plans for promoted Vines or promoted Periscopes," Mr. Lunenfeld said at the Collision tech conference in Las Vegas this week.

For now, that means Twitter will likely lean heavily on Niche, a company that connects brands with social media all-stars. Twitter acquired Niche in February for a reported $30 million. Niche, Mr. Lunenfeld said, has relationships with 10,000 social media "creators" and is especially well connected on Vine.

"A brand or an ad agency comes to us and says, 'I'm launching a new product; it's targeted to this audience,'" Mr. Lunenfeld said. "We'll say, 'Okay, here's 15 people [and] five of them, alone, have a combined audience bigger than BuzzFeed.'"

HP, in one case, used Niche to find talent to create ten Vines promoting the launch of a convertible laptop. The Vines were so engaging, Mr. Lunenfeld said, that the company turned them into a 30-second TV ad. "We knew there was something special there, and the backend metrics showed that purchase intent, brand awareness, all those things went up," he said.

Twitter must be careful with its approach to advertising on Vine. The community on the platform is tight-knit and not likely to respond positively to ads forced into their streams. Instagram, another visual platform, faced a backlash when it introduced ads.

"We're really focusing on building the product, the experience and the community first," Mr. Lunenfeld said. "Then we've got strong relationships with every advertiser to learn how to promote that through Twitter proper."