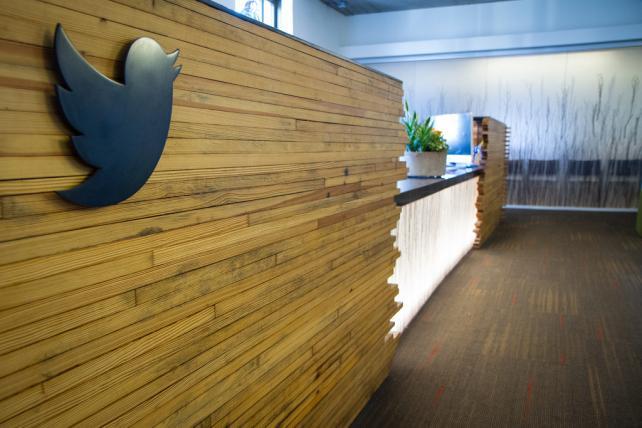 Twitter reportedly plans to begin showing people the top tweets they missed since the last time checked in, its latest attempt to give visitors a better experience and more reason to come back. Now Twitter has created an ad product to greet those visitors when they arrive.

Twitter will start serving a single video ad in people's feeds when they first open Twitter's app or log into its desktop site, the company said Tuesday. Called First View, the ad format appears to be Twitter's version of a home-page takeover. Users in the U.S. will see the ad unit first, followed by global audiences.

One brand will own that First View slot in people's feeds exclusively for 24 hours at a time. Individuals will only be shown the ad one time in that 24-hour period.

It's unclear whether brands are required to pay a fixed upfront cost for the ads or pay based on how many times their ads are shown. A Twitter spokeswoman declined to comment on the format's pricing structure.

Given the ad's exclusivity and likelihood to be seen, the First View format is likely to fetch more interest and money from advertisers, particularly big-budget brand advertisers, than the average promoted tweet.

"One of the things I like about Twitter and actually all mobile video advertising is it's highly viewable inventory," said Deep Focus CEO Ian Schafer. "This one-ups that clearly. If it's there right when you launch the app, it's pretty much 100% viewable from the get-go. At a time when advertisers are critical about publishers and the viewability of their ad formats, this sounds like one you can count on."

The offering fits with big brand advertisers' desire for video that reaches wide audiences, said eMarketer analyst Debbie Aho Williamson. "Twitter's been selling video advertising for a while but maybe getting the biggest audience possible wasn't a possibility until Twitter offered advertisers something like this." 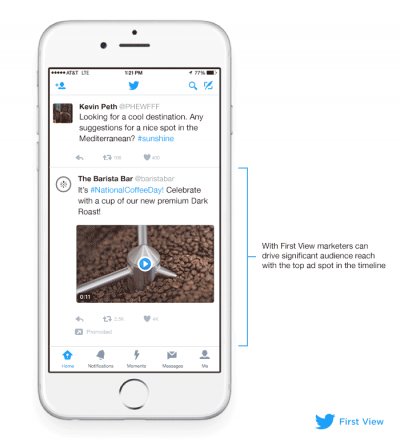 That could help further boost Twitter's ad revenue, which grew by 60% year-over-year in third quarter to hit $513 million, and help its standing among investors when the company reports fourth-quarter earnings on Wednesday amid a number of recent executive departures and questions about the company's prospects going forward.

But Twitter's ad revenue growth hasn't been a problem; its audience growth has been. And this new ad format appears to pair nicely with Twitter's apparent plan to solidify its audience and reduce any churn from people who already don't have much time to spend on Twitter and are unwilling to spend that time scrolling through a stream of tweets to find the ones most of interest.

On Friday night BuzzFeed reported that Twitter planned to roll out a version of its feed that would algorithmically rank tweets based on what it thought individuals would be most interested in seeing, similar to Facebook's news feed that doesn't order stories reverse chronologically. On Saturday The Verge reported more details of that plan. Instead of a full-blown, Facebook-style overhaul of Twitter's feed, the algorithmic feed would only be shown when people first open the app and would be designed to catch them up on the top tweets they likely missed since the last time they had checked Twitter.

The algorithmic catch-up feed and First View ad format appear to be complementary products. The former would make it easier and more worthwhile for people who don't live on Twitter to check their Twitter feeds. And the latter would give Twitter a way to capitalize on any increase in daily active users that the catch-up feed would create.

First View is "clearly" a version of the algorithm move for advertisers, Mr. Schafer said. The while-you-were-away feed "is for the casual user," he said. "This is one that makes sure Twitter's what you want it to be when you open it up if you're an advertiser."