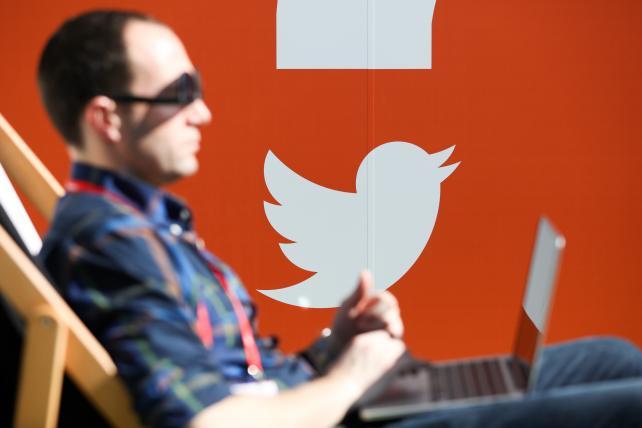 Twitter beat revenue estimates in its latest quarterly report and said it added more monthly users, indicating signs of life at the social network that has struggled to attract new consumers and advertisers. The shares surged.

Twitter has been battling the perception that it's a niche media platform, despite its emergence as President Donald Trump's favorite communications tool. The company reported that monthly active users gained 4 percent to 330 million in the third quarter, a positive sign for investors who view audience size as a measure of Twitter's long-term health. Daily active users increased 14 percent, the fourth consecutive quarter of double-digit growth, the company said Thursday in a statement.

CEO Jack Dorsey has shifted the company's focus to videos and live events as a way to spur audience growth. Twitter attributed the user gains to changes making the platform easier to use, improved marketing and heightened awareness of Twitter from global events.

Twitter reported its net loss narrowed to $21.1 million, or 3 cents a share, in the quarter. Profit excluding certain costs was 10 cents a share, compared with analyst estimates of 7 cents. Revenue declined 4.3 percent to $589.6 million. Analysts projected $587.5 million, according to data compiled by Bloomberg. Twitter says the better-than-expected sales were driven by its video advertising and data-licensing platforms.

In the shareholder letter Twitter hinted that it also might be making permanent its recent experiment of allowing longer tweets. "We expect to see fewer Tweets running into the character limit over time," it said.

Revenue in the U.S., Twitter's most important advertising market, fell 11 percent from the same period a year earlier. The company has failed to capture more than a tiny fraction of the digital advertising market, which is dominated by Alphabet's Google and Facebook Inc. Total revenue growth was driven by international sales, which grew 6 percent from a year earlier.

"There's nothing here that suggests this is the beginning of a longer term recovery," says James Cakmak, an analyst at Monness Crespi Hardt & Co. "You can extract pockets of bright spots certainly, but in totality, the story still needs work."

The company gave a fourth-quarter outlook for adjusted earnings before interest, tax, depreciation and amortization of $220 million to $240 million. Analysts projected $200 million. "We also expect that at the high end of our adjusted EBITDA range, we will likely be GAAP profitable," Twitter said. The company hasn't made a quarterly profit on that basis since going public in November 2013.

Twitter said it had adjusted the number of monthly active users back to the fourth quarter of 2014 after determining it had incorrectly counted users of a service for third-party apps as active participants on the platform. After the change, the company says it had 326 million users in the second quarter, rather than 328 million.

Analysts shrugged. "I don't think the user change is significant at all—a million here or there is nothing, especially in context of the much larger number of fake accounts," says Brian Wieser, analyst at Pivotal Research, in an e-mail. "In this case the difference was small"

In recent years, Twitter's user growth has been crimped by its reputation for harassment and trolling, a view that was highlighted recently when it temporarily shut down the account of actress Rose McGowan after she spoke out on allegations of sexual harassment by Harvey Weinstein. And with the controversy over Russian meddling in social media to influence the 2016 U.S. presidential election, the company is finding itself often on the defensive.

"No one is going to pay up for the stock until they see some mechanism for them to grow," says Michael Pachter, an analyst at Wedbush Securities. "Based upon the way that the president and other trolls use it, there's a connotation that if you use Twitter, that you're going to be subjected to open hostility from users."

Twitter has been moving quickly to address the harassment and the foreign influence. The company says on Tuesday that it's bringing greater transparency to advertisements on its site by exposing who paid for the ads, who they are targeted to and how long the campaign has been running. Last week, Twitter says it will immediately and permanently suspend accounts that clearly harass or post nude images without consent. Dorsey conceded that Twitter has "to do a better job explaining our policies and setting expectations for acceptable behavior on our service."

Twitter has also made improvements to its algorithms that catch spam and malicious actors after researchers found hundreds of thousands of bots, some linked to Russian operators, that posted political messages during the election. Despite the changes, researchers say Twitter's technology lags behind that of Facebook and Google.