Twitter Tip-Toes Line Between Politics and Social Activism With #WallForACause 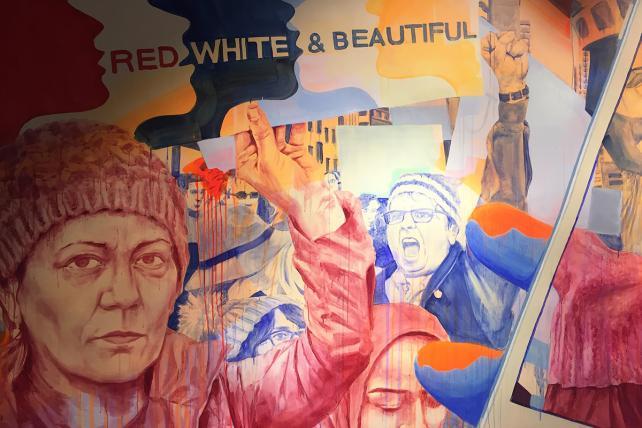 Twitter may well be the ultimate communication tool for social change -- an impression it is trying to underscore with its #WallForACause, an actual wall in its New York City office. To promote social causes, the company turned over to artists a literal blank canvas, seen only by employees and visitors -- and in a lot of selfies. It's meant to showcase how 140-characters can breed world-altering movements.

Curious, then, that the wall makes no reference to Twitter's perhaps most prolific and famous user -- the country's Tweeter-in-Chief, who has upended presidential communication protocol by using the service as a megaphone to attack both opponents and political allies, and unveil social policy changes. On the Friday of Donald Trump's inauguration, 12 million tweets were sent about the subject, according to Twitter, yet he is not represented on the wall.

Instead, Artist Esteban del Valle is currently displaying a triptych of canvases, portraying three different scenes. The first depicts January's Women's March, and the far right canvas shows Killer Mike and El-P, from Run The Jewels, performing before a crowd as concert-goers hold their phones, recording and sharing the experience on social media.

Killer Mike was an active and outspoken advocate for Bernie Sanders during last year's Democratic Party presidential primaries but there's no overt message in the work as a whole, del Valle insists. Instead, he said he's been thinking of each canvas as a "mood."

The middle mural was to originally depict Trump from behind, sending out a tweet, but it was deemed too political. Instead, del Valle painted a man looking at his phone, "a personal moment," del Valle said, as the man presumably reads his (fake?) news from the Twitter app.

"I'm not trying to have a position of politics, one way or another," the artist said. "It's really about looking at how these tools allow people to find their communities, curate their communities and make them stronger."

In other words, breaking down the wall while Trump builds his own.