If Facebook's recent internet past is any bellwether, mobile may represent the next major boost to its ad revenue.

For one, U.S. smartphone users are as addicted to Facebook on their phones as they are online. In March, 78 million adults visited Facebook's app or website on their smartphones, according to ComScore's first mobile-media rankings. (Facebook reported 488 million active users of its mobile products worldwide in March; ComScore's estimate is for U.S. smartphones only.)

And U.S. users spend more mobile time on Facebook than on any other property -- that 's 12% of all time spent on their phones, for an average of more than seven hours a month (the same goes for online).

Facebook began monetizing its mobile audience only in March, however, rolling out sponsored stories for mobile newsfeeds.

"We do not currently directly generate any meaningful revenue from the use of Facebook mobile products, and our ability to do so successfully is unproven," the company reported in recent regulatory filings.

Yet Facebook succeeded handily when it made a similar leap into online ads.

In just a few years, Facebook has become the top U.S. seller of online display ads, besting giants like Google, Yahoo and Microsoft. Google collects the largest share of U.S. mobile-ad spending, which is expected to hit $2.6 billion this year, according to eMarketer.

U.S. adults' mobile behavior looks in some ways much like desktop or laptop usage. Just as it is online, Google is No. 1 by visitors on smartphones, where it had 94 million in March.

There are some shifts among the internet giants on phones. Facebook attracts larger U.S. audiences than Microsoft and Yahoo in mobile, while those two still have greater pull online. Amazon also moves up the ranks on phones as the No. 4 most-visited mobile property, including visitors to both mobile web and apps.

Another winner in ComScore's report is apps themselves: Four in every five minutes spent with mobile media are with apps, even though equal numbers of people visit mobile websites and apps. 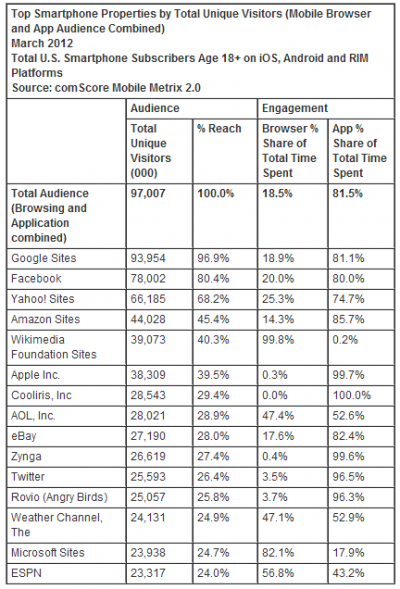