The candid-camera-esque video exploded on YouTube in late May, prompting the brand to whittle the five-minute clip down to a 30-second TV spot. The spot began airing last night during Game 1 of the NBA Finals on ABC and is also slated to air during Games 2 and 3 as well as on the WatchESPN live-streaming app. Pepsi Max is planning a homepage takeover on ESPN.com this Saturday . 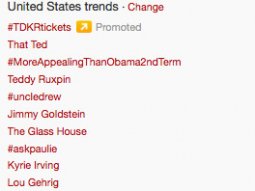 As of Tuesday, before the 30-second spot aired, the YouTube video had led to more than 10,000 #uncledrew tweets.

Sam Duboff, a spokesman for the brand, said a 30-second spot wasn't on the brand's radar screen initially. "We uploaded the video two days after Kyrie [Irving] received the Rookie of the Year award to build on the excitement of his achievement," he said. "Once we started looking at the metrics, it became clear that we couldn't miss the opportunity to bring Uncle Drew to the sport's biggest stage."

Since the ad was posted on May 18 it has amassed nearly 10 million views. And Mr. Duboff says 80% of viewers are still watching at the four-minute mark. As of Tuesday, before the 30-second spot aired, the video had led to more than 10,000 #uncledrew tweets, many repeating Uncle Drew catch phrases like, "I get buckets," "Don't reach, youngblood," and "I'm a real baller."

Mr. Duboff says #uncledrew and "Kyrie Irving" were trending worldwide on Twitter for almost half an hour following the ad's debut last night.

Davie Brown Entertainment worked on the video, which features Kyrie Irving disguised as a sweatshirt-wearing, pot-belly-sporting elderly man named "Uncle Drew." He's attending an outdoor basketball game where his nephew is playing, but when one of the players goes down with an injury, Uncle Drew takes the court.

He starts slow and stiff, but then stuns the crowd with a flurry of crossover dribbles, dunks and three-point baskets, taunting his opponents all the while.