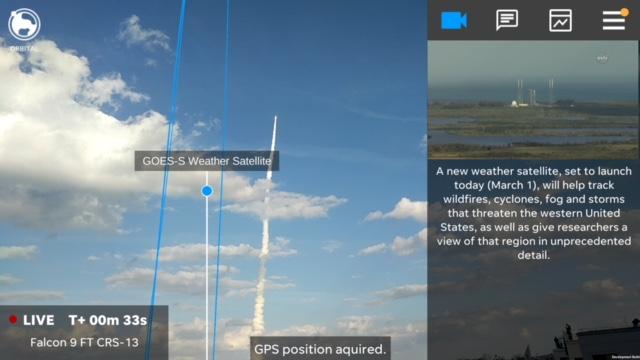 USA Today Network, a group of more than 100 Gannett-owned publications including USA Today, is set to roll out its first augmented reality app, focused on the 30 rocket launches slated for Cape Canaveral, Florida, this year.

The app, dubbed 321 Launch, will use AR tech to show launches from SpaceX's Falcon 9 and the United Launch Alliance's Atlas V rockets. Users in New York, for example, will see a rocket against their own sky on their phones' screens, complemented by information such as predicted flight patterns. The app can also present live video of launches in a more traditional way.

There are no ads yet in the app, which comes out March 29, but the company intends to offer sponsorships in the future.

Publishers are striving to come up with innovative ways to capture younger readers who don't consume news the way people their age did even a few years ago. The New York Times, for example, has found success with its year-old podcast "The Daily," which is free despite the paper's pay meter online.

"The Daily is the best billboard the New York Times has ever had," Sam Dolnick, assistant managing editor at the Times, told Ad Age in a recent interview. "The next generation of subscribers will come to us not from picking up a stray page, but from listening to The Daily."

Bloomberg Media is hoping to draw potential readers to its brand through TicToc, a live-streaming 24-hour video news channel that lives entirely on Twitter. The two-month-old effort is designed partly to introduce people to its brand on a platform where news often breaks first.

Like Bloomberg and the Times, USA Today Network is tapping its in-house resources for its new effort. It developed the app using employees who previously made video games at outfits such as Electronic Arts.

Ray Soto, director of emerging technology at USA Today Network and one of those previous EA employees, estimates the app would have cost the publisher at least $1 million if its development was outsourced to a third party.

"This is our first AR experience," Soto says. "One of our main goals is to get a more younger, more engaged audience and we want to make sure we get the user experience right."

Ad Age had a hands-on demo with the app at SXSW, and initial impresions were good. The app's fluid design clearly showcased the creators' video game expertise. USA Today Network says it's using its reporters from publication Florida Today to provide context about the rockets. "Rockets use a lot of water when they launch, but it isn't for cooling things down," Soto says by way of example. "It's actually to dampen the noise because they get that loud."

The app highlights nuggets of information like that when people use it. In the future, Soto says the publication will explore other uses for the underlying AR technology, like layering info onto sports experiences.