In USA Today Redesign, Hope for a New Canvas for Web Advertisers

TV Listing Will Soon Include Web Shows On YouTube and Hulu
READ THIS NEXT
TikTok tactics: What to know about reaching audiences on the social media platform

Thirty years after it introduced a new type of colorful, graphical storytelling to the newspaper world, USA Today will unveil a redesigned print publication on Friday that pushes further in that direction, and a complete overhaul of its website that it hopes will produce a more fluid, app-like experience that some would say resembles the Flipboard mobile app.

The changes to its website, which will launch in beta on Saturday , feel the most drastic. USA Today sites registered 38.7 million visitors in August, up 48% from 26.1 million a year ago. And USA Today Sports Media Group, a subset of that overall number, grew 133% from 11.6 million to 27 million over that same period thanks in large part to the January acquisition of the Big Lead Sports network of blogs. 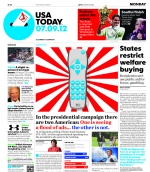 The new design features photos prominently; a layout that may make visitors attempt to swipe at their desktop screens; and navigation based on what David Payne, Gannett's chief digital officer, referred to as "left, right, close" clicking. When a visitor clicks on an article from the home page or a section front, the story bleeds to the front of the screen, and the underlying page stays. Readers will click arrows to the left and right of stories to get to new articles. In an ideal world for USA Today, after a few clicks viewers will be greeted with a full-screen ad similar to what you would see on tablets. Click an "x" button, and you are back to the home page or section front.

"I was pissed off and frustrated about how news sites had not evolved," Mr. Payne, former GM of CNN.com, said of the radical changes. "In a utopian world, we start migrating out of little boxes and really take advantage of the power of these things (he said pointing to his laptop). These are much more powerful than televisions."

The new design was driven largely by a desire to give advertisers a new type of digital canvas with which to work.

"I think the full-page digital ad will be the primary one of the future," said Larry Kramer, the MarketWatch founder who was hired in May as USA Today's president and publisher.

So does that mean no traditional 300x250 display ads on USA Today websites? Not yet. Are advertisers on board with that shift?

The print redesign is characterized by more color and some new elements in part meant to appeal to advertisers looking for a type of print sponsorship. On the markets page, USA Today is partnering with a startup to introduce a stock index that will display the biggest market movers based only on the investments of everyday Americans, otherwise known as "retail" investors. Mr. Kramer said this is an example of USA Today's focus on catering to the people on Main Street .

The TV listings page now includes listings for premium web video, such as content being shown on Hulu and Yahoo Screen. This new feature may be reproduced on the web, where there is the option to sell sponsored links. A new print logo features a bright-colored circle that may include an image overlaying it on the paper's front page and section fronts related to the news of the day. Quotes that are called out -- "pull quotes" -- in articles may be displayed in color now as well.

USA Today's print and digital editions averaged paid weekday circulation of 1,817,446 in the six months ending March 25, roughly unchanged from 1,829,099 a year earlier, according to its reports with the Audit Bureau of Circulations. Individually paid circulation averaged 647,769, down 6.6% from 693,721 a year earlier.

Both redesigns were well under way by the time Mr. Kramer was hired, but he said he has been involved heavily over the past few months, predominately on the print side where he pushed aggressively for new ways to incorporate advertisers. "In the case of print, I detected a process that I felt was more disconnected," he wrote in a follow-up email. "We had a hugely talented group working on it, but without an editor or publisher involved (both spots were empty at the time) [t]here wasn't clear guidance or decision making."

Mr. Kramer is also pushing for changes in how his journalists gather and publish news. In the past, USA Today has often pushed out a quick breaking-news story or wire story for big news events, and then the next story on the subject would wait for the print paper. Now, he wants reporters to fill the gap on the web between those two types of stories. One way the publication has started to do this is by leaning on the 23 Gannett television stations to stream live video if they are near big news events. (Over the past year, the company has finally gotten the infrastructure in place to make this possible.) One of the first examples of this was USA Today's digital coverage of the Aurora shootings, which included live video from Gannett's KUSA-TV, based in Denver.

Another big change: the publication, once renown for its stripped-down, just-the-facts prose, is pushing some of its journalists to let more of their personal voice shine through in their writing. This doesn't mean more "opinion" pieces, but a shift to letting some personality come through at a time when readers are getting glimpses of it anyway by following journalists' personal feeds on platforms such as Twitter. "Our voice has been the brand," Mr. Kramer said. "Now we are going to be a symphony of instruments."

Next, the digital team is looking to roll out the redesign to Gannett's 80 other newspapers.

Wolff Olins worked on the print redesign and Fantasy Interactive partnered with USA Today to produce the new design and user interface of its digital products.