Welcome to the Video Revolution

If you're in the old-school TV business, you might feel vaguely comforted by the bottom two bars in the charts below. The obvious takeaway is that, according to Nielsen, the average American is still watching lots and lots of video in the form of traditional TV, broadcast and cable. Roughly five hours of TV per day, in fact, for a total of 149 hours per month -- easily still enough for viewers to feel guilty and resolve to get outside more often.

But then consider that in just a year's time, the average American has cut traditional-TV viewing by more than six hours per month. And then take a quick glance at some of the other pairs of bar charts, and you start to get a sense of what people are increasingly doing instead of watching traditional TV. Like, most notably, watching video on the internet three more hours per month in the final quarter of 2014 than a year earlier.

That's why this week we took a particular look at the video revolution -- to which we welcome you, but has of course been running for a long time.

What sorts of video are people watching on the internet, exactly, and where? Good question. Certain very well-financed producers of original web video content insist that they're the future -- though, so far, they're not necessarily doing a great job of creating enduring hits. Pro producers, to their great annoyance, often have to compete head-on with scrappy indie producers who gin up content on the cheap for a YouTube audience of young viewers who seem to care little about production values.

Purveyors of traditional TV content, meanwhile, may be growing their viewership on desktop computers and mobile devices, but the industry is still waiting (and waiting and waiting) for a standard means of measuring those stray eyeballs, until which time advertisers don't want to pay for them. And it seems everyone -- from Apple to Nickelodeon to Sony to Verizon -- wants in on the so-called over-the-top world.

At least as people watch more video on smartphones that go everywhere, they might actually be getting out more. Marketers just need to know how to follow. Keep an eye on our video coverage this week. 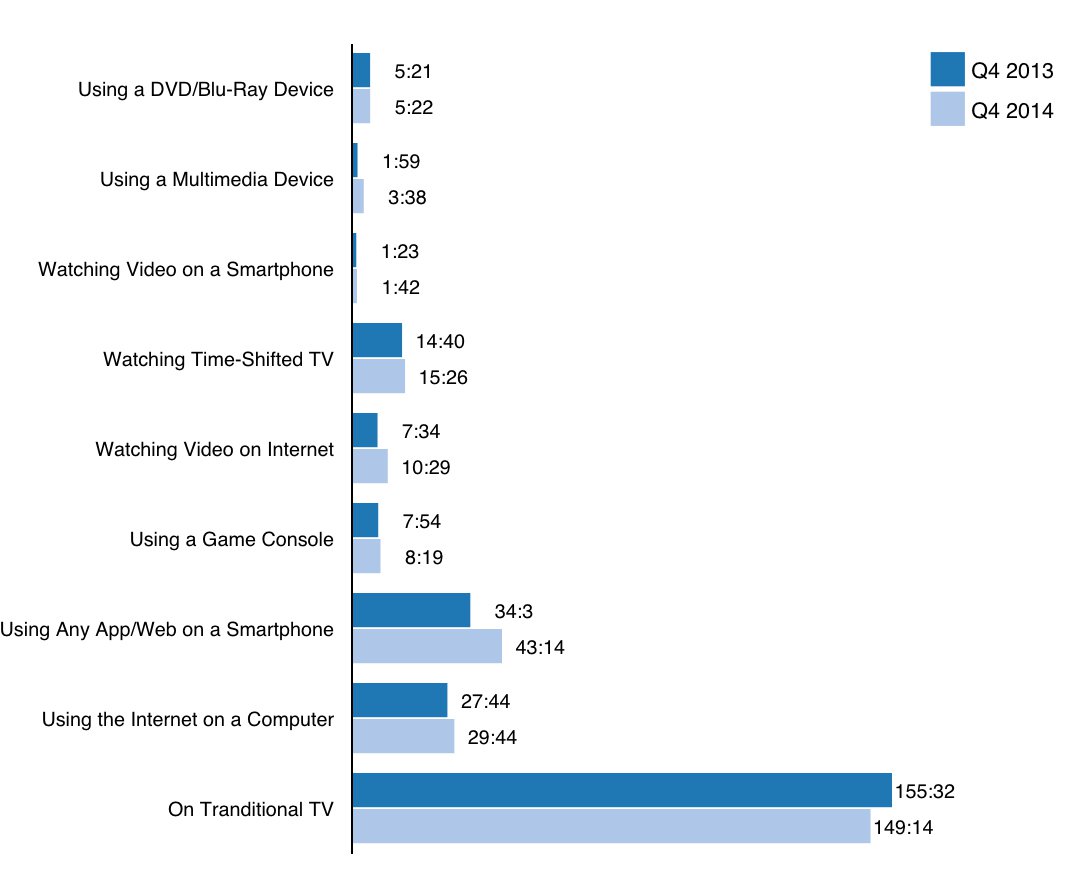 Credit: Nielsen's Total Audience Report, Q4 2014
Chart by Chen Wu
(Watching video on the internet has jumped three hours per month year over year, a 38% increase between the final quarters of 2013 and 2014.)
Video Revolution may not work on your platform. Please view it on AdAge.com