It's the Year of the Monkey; Watch Pepsi's Viral Holiday Hit | Ad Age
Skip to main content
Sign In Register

It's the Year of the Monkey; Watch Pepsi's Viral Holiday Hit

Pepsi Got Over 15 Million Views in a Week By Evoking a National Superhero
READ THIS NEXT
TikTok tactics: What to know about reaching audiences on the social media platform

China's Year of the Monkey is coming, and there are sure to be countless primate-themed campaigns. The holiday isn't until Feb. 8, but Pepsi got a head start with a six-minute viral video that's had over 15 million views in a week. It's not about a monkey exactly; it's about a performer who played a monkey in a 1980s TV show. If you're not Chinese, the whole concept requires a bit of explanation.

The retro TV show was based on "Journey to the West," a classic Chinese tale about a clever, mischievous monkey king with magical powers. The monkey king has been China's national superhero since the 16th century.

"The Monkey King to us is like 'Star Wars,'" said Danielle Jin, PepsiCo's VP for beverages in greater China. "The story itself is sort of like Batman or Spiderman meets 'Lord of the Rings.'"

The '80s TV version, complete with retro special effects and stunts, had massive influence at a time when China's pop culture was still emerging.

"For those of us who didn't live in China then, it's hard to grasp how few entertainment channels they had in the mid-80s," and how much of a mark the show made, said Andrew Lok, founder of local independent agency Civilization, which made Pepsi's new brand film.

"It was a family-friendly TV series that was rerun every single year, and when you were five to 15, stuck at home in the afternoon watching TV, you were watching this, from Tier 1 all the way down to the villages," said Mr. Lok, who directed the brand film himself.

The video is part of PepsiCo's annual Spring Festival integrated campaign for China, "Bring Happiness Home," which has run for five years. It tells the true story of a boy who came from a family of performers that has reenacted the legend of the Monkey King for generations. The performer Zhang Jinlai, commonly known as the "Sixth Little Master," wasn't supposed to have the part; his older brother was groomed for it, but he died of leukemia. To play the athletic role for TV, Mr. Zhang had to overcome challenges including nearsightedness. 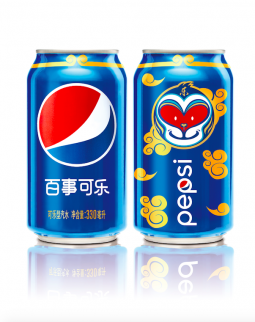 Several versions of the new brand video are circulating online; the most popular is a 6-minute cut that has racked up nearly 15 million views on internet giant Tencent's video site, and more views elsewhere. "People are looking for longer and more substantial content to view" in China, where the box office is exploding as well, Mr. Lok said.

That's one interesting takeaway; another is that in a country where marketers tend to stress newness and celebs, an ad featuring '80s nostalgia and starring a middle-aged performer resonated, even with the young.

For some people, Ms. Jin of PepsiCo said, the ad evokes memories. For others, it makes them reflect about what many in China put aside during the economic boom years – heritage, craftsmanship – when people were trying to keep up amid the fast pace of change.

"We sort of forwent a lot of great traditions and the roots we used to celebrate," she said, noting that many in China feel ready now for culture to play a greater role. And there's also the rebellious monkey himself, who fits with Pepsi's brand message of celebrating youth and encouraging their journey.

Other digital videos are still to come. The integrated campaign also includes short TV spots featuring celebrities, and a cute limited edition monkey-emblazoned can sold on e-commerce site JD.com. (Pepsi has been upping its game in design lately.) Along with Civilization the brand tapped VML China for digital and ARKR, part of China's digital agency network Leo Group, for social. GroupM's Mindshare is the media agency, and BlueFocus is doing PR. The campaign was also teased through six-second video ads on Tencent's popular WeChat mobile app, which has been running more ads over the past year.