Still Watching Prime-time, but Multitasking on Many Screens
READ THIS NEXT
What the TikTok ban means for brands

The perception that online video is cannibalizing television viewership seems to be just that : a perception. At least during prime-time hours.

More than half of web series video viewers (56%) say they still tune in regularly to watch prime-time television, according to a survey of 1,500 people recently commissioned by Blip.tv, an online platform for web series.

"The general trend that we are seeing is that people are not going to give up their favorite TV shows," Blip.tv co-founder Dina Kaplan wrote in an email, "but as the amount of quality online content increases, users are discovering more and more original content online."

The study also found that more than a third (36 %) of respondents are watching television and viewing online videos simultaneously during prime-time hours.

"It's validating the move away from the argument that online video viewing has to come at the expense of television viewing," said Amanda Richman, president-digital at MediaVest, when told of the findings around primetime viewing. "Both can be growing healthily at the same time."

Only 16% of respondents said they view video exclusively online during prime-time hours.

The challenge for marketers, Ms. Richman said, is to continue to identify strategies to integrate advertising and programming across platforms. 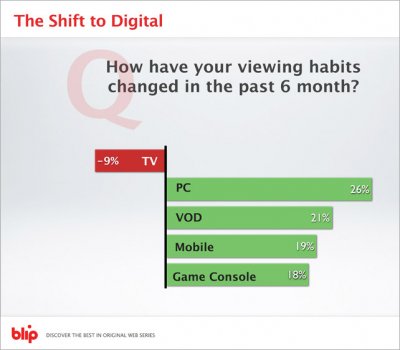 "For us, we're thinking about how we plan against developing and designing for the human experience and what the viewing experience is on different platforms," she said. "If there's video viewing across both screens, how should the advertising connect, should we program an online experience that complements television and vice versa?"