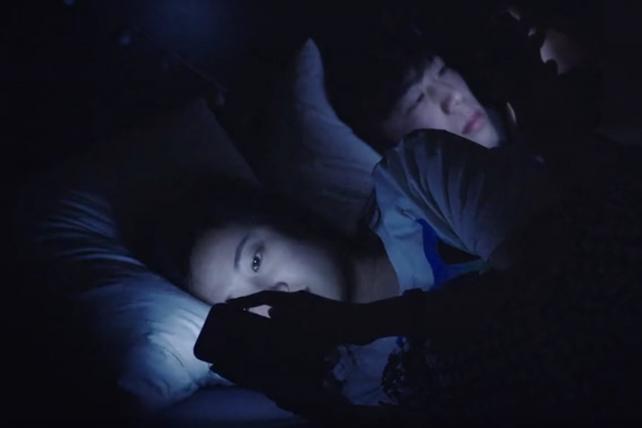 For people outside China, it can be difficult to understand how tight of a grasp the WeChat app has on people's lives. The average user sent 74 messages a day on the app, WeChat parent company Tencent Holdings said last year. Half of users spent over 90 minutes a day using it.

WeChat is only six years old, but with 889 million monthly active users, it has transformed the way people in China interact, do business, read the news, buy things and pay their bills. It just did a little experiment to see what happens when people are forced to log off for 12 hours.

Tencent worked with Saatchi & Saatchi Guangzhou to film six short documentaries about the experience of people going cold turkey. The videos seem designed to remind people of how much they rely on WeChat, while encouraging them to disconnect sometimes to have more authentic human experiences. Yes, the company is apparently encouraging people to think about what WeChat addiction is doing to their lives.

That's perhaps a sign of how confident WeChat is that everybody's already hooked.

One of the documentaries shows a young couple in constant contact via WeChat. "Without WeChat things wouldn't have moved so fast," the woman says. That's a thought-provoking but debatable point, since they're shown in bed together peering into their respective smartphones.

Deprived of WeChat, they argue, walk their pet rabbit, go to a café and stare at their smartphones (they still have their phones, just not WeChat.) But when the 12 hours are up, the woman gets curious and jealous about who her boyfriend is texting. That relationship didn't make it, according to a release from Saatchi, but their situation must have struck a chord, because the video got around 1 million views.

Before people log off the app, there are some cringeworthy (and at times familiar) scenes of WeChat addiction. A 5-year-old pleads with his mom to put down her WeChat and read him a book. An older woman stays in bed playing with her phone, even when her husband asks her to eat breakfast with him. An exhausted, ill real estate agent scrolls through her messages while hooked to an IV. She's always on, fearing that she'll miss a message from a client and lose a sale. But things were even harder for her without the app for 12 hours: She hit the street with real estate brochures, bundled up against the cold and dealing with constant rejection.

On a personal note: When I got a message about the experiment, I made a tally of every time I used the app for the past 12 hours. I paid for a Starbucks latte; did a group buy of wine; logged in at a business lunch conference and made new connections there; and booked tickets to see "Beauty and the Beast" with my kids. I read two news stories shared by contacts, including one about WeChat parent Tencent buying a 5% stake in Tesla. I sent and received dozens of text messages, personal and professional, indulging in the occasional laughing-crying smiley or heart emoji. During all that time, I was served only one ad, from Canon. WeChat helped the ad revenues of its parent company grow significantly, but it still puts customer experience first.