How Much Are You Really Worth to Facebook and Google?

Ever wondered how much money you're making for Facebook by spending all that time poring over your friends' photos and posting BuzzFeed quizzes about which "Game of Thrones" character you're most like? 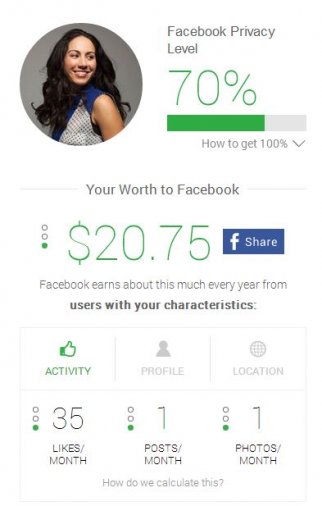 These are raw estimates given by PrivacyFix, an app developed by the security software company AVG, based on publicly available data on how much revenue those companies generate per user, with tweaks based on personal usage. It asks permission to tap into a person's Facebook and Google accounts to show them how their privacy settings are configured and take them to where those settings can be adjusted, in addition to presenting their supposed monetary value.

For Facebook, its calibration takes a person's activity -- likes, posts and photos -- into account, as well as how many friends they have. By its reckoning, women are worth 25% more than men. American and Canadian users generate almost 8.5 times as much revenue on average as people in Latin America, Australia and Africa, according to Facebook's own disclosure.

For Google, its calibration of users' "worth" is based on the volume of searches they've conducted in the past 60 days from the specific browser and device they're using at the time -- with the notion that the more you search, the more likely you are to be clicking on an ad at some point. The tool has no way of knowing whether you're searching for some highly lucrative keyword, like a particular diabetes medication, that would bring in tens or even hundreds of dollars for Google. It also can't know if you're the kind of person who makes it a point to never click on paid search results.

While PrivacyFix's numbers are very rough estimates, it's certainly interesting to consider how your usage habits make you a more or less valuable commodity than other users. And also a reminder that intent-based searching is still a much, much more valuable behavior than over-sharing the minutiae of your day or funny memes with your Facebook friends.

Women more valuable
I'm a woman and live in the U.S. -- facts which on their own put me among Facebook's most valuable users -- but I'm apparently a lot less active on Facebook than the average PrivacyFix user, which is bound to constrain my value. The tool says I've liked 35 items in the past month and posted one photo and one update apiece. The average PrivacyFix user likes 130 items per month, posts updates a whopping 110 times (including comments to other users' posts and photos), and publishes nine photos.

I do, however, have 368 Facebook friends -- more than double the average PrivacyFix user's 175.

AVG declined to disclose the number of people who have installed the app, which it released in September.

However, it's also possible that publishing and liking activity aren't even the best proxy for Facebook engagement anymore. Users who make less noise might sometimes be more engaged, and Facebook is trying to figure out the patterns underlying that more quiet engagement.

The social network is carefully studying the consumption habits of its users to see what sorts of content individuals are truly immersed in, with the end of showing them more relevant content, according to Slate. Thus, not all "likes" are created equal, and a like given by users after they've actually clicked through to read a piece of content in their news feed should be given more weight than likes by users who've scanned a headline and presumably feel an affinity with it – for reasons political, cultural, or otherwise -- but don't bother to actually click to read the story.

So some quiet Facebook users are potentially still spending an outsized chunk of time on the social network and eyeballing more than their share of ads. They're reading articles and looking at photos without leaving a trail of breadcrumbs made up of likes and comments that PrivacyFix could pick up on.