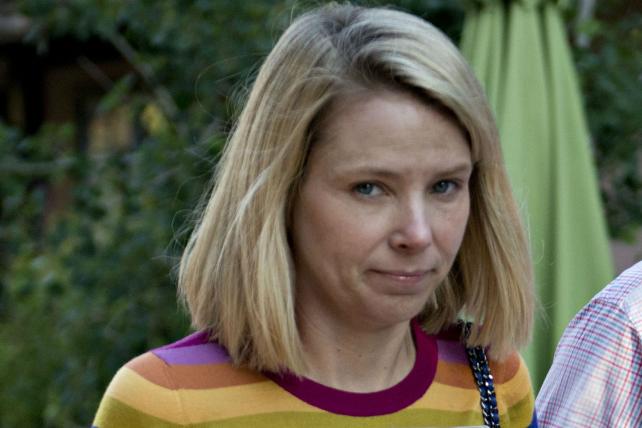 Underlying the market-share increase is a meeting that Ms. Mayer held in early 2013 at a graffiti-decorated conference room at Yahoo's Sunnyvale, Calif., headquarters. There, the CEO challenged a team of employees to create a new ad feature that would run across mobile devices and desktop personal computers -- and gave them 45 days to complete it.

The group, called "Moneyball" after the book about the scrappy Oakland Athletics baseball team, responded by delivering the new service in 43 days. The technology laid the groundwork for the effort that's helping to drive Yahoo's growth in digital promotions on smartphones and tablets.

"We've invested deeply in mobile, and those investments are paying off," Ms. Mayer said on a call with analysts in October.

Yahoo is now projected to be the largest gainer of U.S. mobile-ad market share between 2014 and 2016, according to new data from eMarketer out today. Yahoo's mobile-ad slice will climb to 3.74% in 2015 and to 4.2% in 2016. While still tiny, it's enough to push Yahoo ahead of current number three player Twitter, which will have 3.69% market share next year and 3.8% in 2016. Google and Facebook remain the biggest U.S. mobile-ad companies, with 35% and 17% shares next year respectively.

The numbers show how an effort by Ms. Mayer to marshal resources and refocus the company on mobile is starting to pay off, making Yahoo relevant in a digital-advertising area that's projected to reach almost $60 billion in the U.S. in 2018 from $19 billion this year. In October, Ms. Mayer broke out Yahoo's mobile revenue for the first time, reporting third-quarter sales of more than $200 million, with gross revenue in mobile set to exceed $1.2 billion this year.