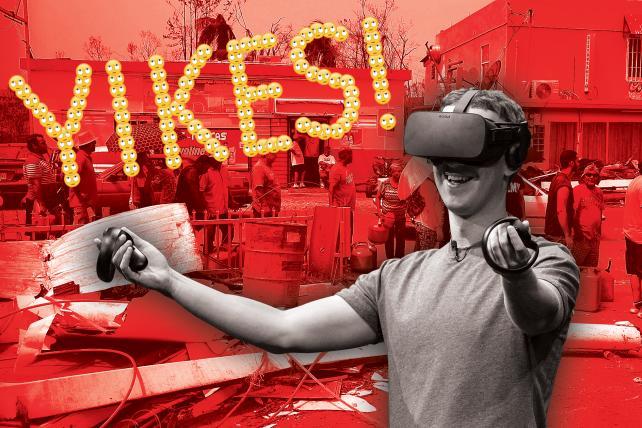 Gary Vaynerchuk, the founder of digital and social marketing agency VaynerMedia, this year joined the pantheon of stars like Michael Jordan, Kanye West and Rihanna with their very own sneaker lines. The GaryVees 001 and 002 by K-Swiss feature Vaynerchuk's signature, just like a classic pair of Patrick Ewings (without the hops).

October found Facebook CEO Mark Zuckerberg in Menlo Park, California, using the company's "social VR" tool Spaces to send his avatar around hurricane-ravaged Puerto Rico. "We're on a bridge here," he narrated. "It's flooded." Then he demonstrated that he could virtually high-five a colleague on the same virtual trip. "Please do not exploit Puerto Rico's suffering for promos," Chelsea Clinton wrote on Twitter. "Thank you @facebook for supporting relief efforts—doesn't make the exploitation ok."

Phoning in the Super Bowl

The Super Bowl has become a venue for marketers to roll out high-impact commercials created especially for the occasion. And yet, Coca-Cola, Sprite, Google and Fiji Water all decided to just toss some preexisting work into February's Super Bowl LI. GoDaddy tried harder.

The ad industry may be fed up with the sprawl and cost of the Cannes Lions International Festival of Creativity, but only Publicis Groupe has come up with a reason to skip it and other awards shows for a year. Marcel, the company explained, was an AI-powered intranet under development requiring "all investments and focus" from across the group. Barton F. Graf answered with a video touting its own new internal operating system, S.H.O.U.T., which facilitates intra-- agency communication via yelling.