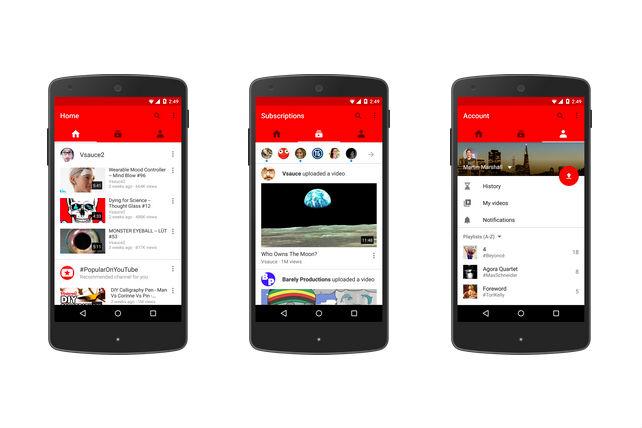 YouTube has three top priorities: "mobile, mobile and mobile," according to its boss Susan Wojcicki.

On Thursday, the longtime Google exec took the stage at VidCon at the Anaheim Convention Center in Anaheim, Calif. -- think Comic-Con for the digital video crowd -- to unveil a new look for YouTube's mobile site and apps. In place of the existing single-screen design that features a curated feed of videos based on what people have watched as well as what channels they subscribe to, the redesign adopts a three-paned look that's supposed to make it easier for people to find new videos to watch -- and add to the time they spend watching YouTube, which is already up 60% year-over-year.

Now when people visit YouTube's site or open its Android app -- and soon on iPhone -- they'll see a new home screen that curates videos based on what people have watched, including organizing recommendations into playlists. A second screen will show the latest videos from the channels that people subscribe to, though if people really don't want to miss a channel's latest uploads they can now sign up to receive notifications when a new video is posted. And a third screen will house the playlists a person has created, videos they've watched before and the videos they've uploaded.

Additionally, the updated apps and mobile site will support vertical videos, potentially a big boon to the Snapchat-led trend that has agency execs describing it as the first mobile-native video format.

YouTube Director of Content Strategy Jamie Byrne spoke with Ad Age following Ms. Wojcicki's presentation; he explained why people are spending more time watching YouTube videos on their phones as well as what the digital video giant is doing with brands during VidCon.