YouTube and Fox Sports have agreed to jointly sell ads on the sports network's YouTube channel, the companiessaid, signing up Burger King as the initial sponsor.

As part of the program, which began earlier this month to coincide with the start of the NFL season, Burger King branding and ads appear on the fantasy football-themed section "Inside Fantasy." The fast-food chain is running preroll ads against videos there along with banners promoting its Buffalo Chicken Strips. Its branding is also featured within the videos -- on a news desk, for example, bearing the Burger King logo. 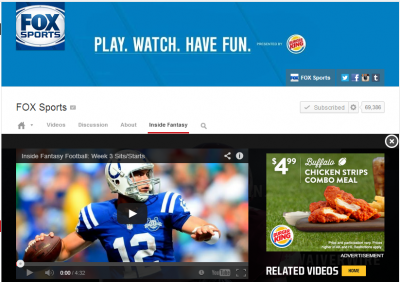 YouTube and Fox Sports had pitched the program to advertisers during the video site's Brandcast event in May as part of the Digital Content NewFronts, online video's equivalent to TV's upfront presentations.

Tim Katz, YouTube's manager of sports content partnerships, declined to disclose how the ad revenue is split between YouTube and Fox Sports. YouTube usually takes a 45% cut of ad revenue from premium content partners, but has worked out smaller percentages with some, according to sources.

Fox Sports, which recently launched its would-be ESPN rival Fox Sports 1, is not currently bundling TV spots with these YouTube deals, but Ms. Newman said that is "definitely something we're exploring."