WildTangent Releases New Platform for Tapping Into Social Games
READ THIS NEXT
You Can't Stop Instagram Bots by Looking. Brands Have to Stop Buying Them

If you spend money on your virtual cabbages in Farmville, you're in the minority. While players can spend real dollars to enhance the experience, very few actually do. 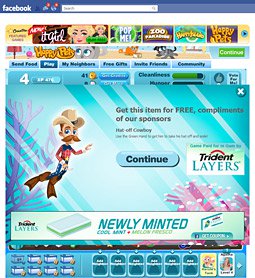 But a new generation of advertisers is willing to help pick up the tab for tractors, weapons, experience points and other virtual goodies. Game marketer WildTangent is entering the fray with its own way for advertisers to reach 350 million casual gamers by paying for their virtual goods.

"In the social game space, less than three percent of users are spending real money, so there's a 97% opportunity here for advertisers to sponsor social game access," said Dave Madden, CEO of WildTangent.

The company, around for 11 years in Redmond, WA, designed an advertising platform for social games with a set of APIs that game developers can use to allow advertisers to tap into the games. As of this week's launch, six Facebook games, including The Price is Right, Happy Pets, Happy Aquarium and It Girl are using the platform.

It's a strategy similar to SVNetwork's network on Zynga, which also allows users to earn game credits in exchange for engaging with ad experiences, and a way to bring the mechanics of game play into the ads themselves.

WildTangent has made deals with brands -- just finalized this week is Microsoft's Kinect -- for sponsorship inside the games. The basic exchange goes like this: A player watches a 30-second sponsored video and then gets a coveted virtual item or extra playing time. Kinect is a sponsor of The Price Is Right game, a brand in and of itself, both in Facebook and in real life.

According to research, WildTangent and the advertisers it's working with -- Trident, Microsoft, Cheerios, Honda and others -- are on the right path. Though the virtual goods market is expected to grow to as much as $2.1 billion in 2011, there is plenty of room for advertising. Yet ad spending in social games is still nascent, a $192 million market in 2011, according to eMarketer.

WildTangent is participating with large game creators like Playdom, Crowdstar and Ludia, producer of The Price is Right Facebook game.

The Price Is Right has been mixing game play and commerce on TV for 38 years; now they're taking that experience into Facebook. "The Price Is Right game on Facebook is the ultimate social game to provide an even deeper opportunity for brands to participate with our millions of players and reward them at the same time," said Alex Thabet, founder and CEO of Ludia. "We look forward to bringing the fans of our Facebook games these extra bonuses from relevant brand advertisers."