The World's Worst Agency Websites (For IPhones and IPads)

Looks Like a Lot of Big Agencies Need to Bone Up on HTML5
READ THIS NEXT
You Can't Stop Instagram Bots by Looking. Brands Have to Stop Buying Them

It's no secret that agencies have a history of over-wrought and over-designed websites. Why? Well, partly to show how clever and digital they are and to win business. But in redesigning his own site, McKinney Art Director Nick Jones stumbled upon an unfortunate, albeit not surprising, byproduct of that: Some of the biggest agency websites are built on Adobe's Flash and thus entirely inaccessible from iPhones and iPads.

Now, it's probably no coincidence that Mr. Jones just happened to discover, and call attention to, this industry-wide failing, concurrent with McKinney's own new site launch, which is built, according to Nick, so that you can "Swipe it on your iPad or click it in Internet Explorer." But the point remains: How can any agency expect to build out an emerging media practice and secure business in the growing mobile and tablet market, if their own mobile sites are unusable?

A few years ago, it didn't matter if agencies ignored mobile because there was little, if any, mobile traffic to their sites. But with the tablet market poised to dominate mobile computing and smartphones that make web browsing possible from anywhere, that's no doubt changing. But it's also missing the point: these sites are not about the traffic, they're about demonstrating capabilities, which in the mobile space appear to be about, well, nil.

So, without further ado, we give you the worst agency mobile sites, courtesy of Nick Jones and McKinney. One caveat here: Some sites do actually load to varying degrees, but their flash elements, like video and animated stuff, don't. For example, Arnold WorldWide's is usable, Publicis' is a jumble of words, while Fallon's, Ogilvy's and Euro RSCG's are completely inaccessible. 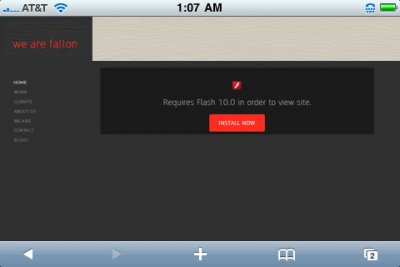 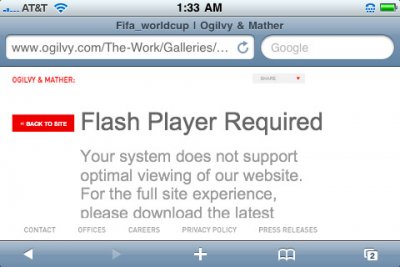