Publishers Need a Plan to Engage the Audience and Make Money -- With Pictures
READ THIS NEXT
You Can't Stop Instagram Bots by Looking. Brands Have to Stop Buying Them
Chas Edwards
It's starting to feel as if this photo frenzy isn't just a passing phase. Maybe there's some inescapable human affection for pretty pictures. We just can't help ourselves. As Antony Young, CEO of Mindshare North America, put it in his recent column for Ad Age: We're seeing a consumer movement toward a more visual culture brought on by technology and media. Smarter devices are prompting more occasions for people to create and consume visual content, while social media is encouraging that content to be shared on multiple platforms. Facebook will tell you the same. When you talk to its executives or founders about the company's inflection point, they'll all tell you some variation of "It's the pictures, stupid." The Facebook community uploads 250 million photos a day, and one Harvard Business Schoolstudy estimates that 70% of all activities inside the social network -- from "liking" and commenting to looking at friends' content or uploading your own -- revolves around photos. Relative upstarts like Instagram and Pinterest are riding the image explosion too, bursting onto the scene with audience growth rates that are even steeper than Facebook's or Twitter's in their early years. Instagram went from launch to a million users in 2 months, and grew to 15 million by the end of 2011, at which point users were uploading 60 photos per second. Pinterest has grown from obscurity to 10 million pinners in 6 months. There's an underlying explanation for this image explosion, according to Shawn Graham atFast Company: "Pinterest's rapid ascent into the social strata has reemphasized something we've known since the day the first camera was invented way back in the 1800s — pictures matter." Pictures certainly matter, and we're taking and sharing more of them than ever before. Ten percent of all photos taken by humankind were taken in the past 12 months. Publishers are taking notice. Photo galleries have long been a staple of the user-experience at entertainment sites like Yahoo's OMG and Entertainment Tonight. But news sites like CBS News and business publications from The New York Times to The Business Insider have gotten religion too. Readers process more information more quickly from images than from text, and thus images drive more audience engagement than text content. Everyone's got an image strategy these days. And like a publisher's mobile strategy or social strategy, the image strategy needs to contemplate three elements: 1. Audience engagement. How can images increase engagement among my existing audience? Most publishers are making great progress on this front — investing in large, high-quality images on every page, and organizing clusters of them into galleries. The only catch is that sometimes the most "successful" images, the ones that are most effective at lighting up consumer interest, are also the ones that launch readers off your site. Your most passion-inspiring images drive visitors to Fox Sports to get an athlete's stats, or to Wikipedia to get biographical info on a political figure, or to Macy's or Gilt Group to shop for the fashions worn by a favorite celebrity. The image apps we create here at Luminate bring that content right into the image itself. If your happiest readers are using you own images to abandon you, it's tough to argue that images should play a more prominent role in your digital publishing strategy — even if it's the format your readers enjoy most. 2. Audience acquisition. How can I convert that engagement into sharing? Facebook and Twitter buttons are a start. Feeding image content into Instagram (as well as Facebook and Twitter) is another way for publishers to amplify their investment in images: It puts them inside social networks where the sharing activity is happening. According toSharaholic Pinterest is driving more referral traffic than G+, YouTube, LinkedIn and Reddit combined. Pinterest makes "pinning" and saving images easy for users of its browser extension, and its integration with Facebook drives new eyeballs to those images (though not all eyeballs click through from pinboard to the original publisher's site). Luminate's social apps are another approach. Rather than waiting for readers to download the Pinterest applet, publishers can present all of their readers with apps attached to each image. Several of Luminate's apps, for example, facilitate positional image-sharing — attaching a comment to the part of the image he or she wants his friends to check out. 3. Revenue. How does the strategy help me make more money? One approach that's gaining traction among smaller sites: Just put ads at the bottom of images, the image equivalent of the overlays at the bottom of YouTube videos. As long as the ad message inside the overlay is highly relevant to the image content, overlays are a reasonable approach. An even better approach, I'd argue, is delivering advertising that's attached to a user-initiated bonus content experience. If a brand sponsors relevant content and services that enhance an image, the reader is much more likely to pay attention. 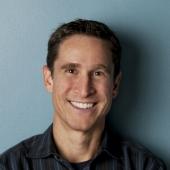 Chas Edwards
Chas Edwards is publisher of the live-event series Pop-Up Magazine and The California Sunday Magazine. He was co-founder at Federated Media and chief revenue officer at Digg.
Follow View all articles by this author