Apple Is About to Change Everything We Know About TV

What tvOS Will Mean for Marketers and Content Developers

When tvOS becomes available in late October, the most influential man of our time will revolutionize entertainment more than four years after his passing.

Watching the presentation of the new Apple TV immediately took me back to a 2010 speech by Steve Jobs. He called Apple TV a "hobby," and told us the number one thing people wanted from it: Hollywood movies and TV shows, anywhere and anytime. "It's that simple," Jobs said. "They don't want amateur hour."

This desire is driving a radical change in how people consume content. For example, Netflix just passed CBS in market cap value. A content-streaming subscription service passing one of the longest standing, most substantial commercial broadcast networks in the world? This disruption marks a clear shift toward convenience and user experience, and validates Jobs' findings from early versions of Apple TV.

The new Apple TV comes with a tvOS for developers to build custom experiences on television. Why is Apple betting on a full-on app ecosystem? Because consumers no longer want just Hollywood movies and TV. They want all their favorite content, on any device, at any time. That includes access to high-quality games, shopping, music streaming, travel, communication, social media, and so much more.

Apple TV delivers that content by giving developers the freedom to build native experiences for large screens, but it goes one step further by really connecting phones to television. Did you find a new game you want to check out on your phone? Launch it on your TV. Did you see something interesting on TV you want to look up later? Add the app to your phone. TV becomes an extension of your personal device. It's always been the best device for getting your undivided attention, and now it's combined with the discovery and connectedness of your phone.

With tvOS, developers will take what they've learned from creating mobile experiences and apply it to the big screen. Apple just changed everything we know about TV.

Opportunities for sports and games

What's the one thing everyone still uses their cable subscription to watch? Sports.

Major League Baseball pioneered the live-event app experience, and was front row for the Apple TV's release. With MLB's At Bat app for Apple TV, viewers can click on a grid of baseball games and stream them instantly. And the experience goes beyond watching -- you can easily grab game stats, just like the native experience on your smartphone.

High-quality games like Guitar Hero Live, Disney Infinity and Crossy Road are already available on the device and you can switch from watching TV to playing games with a flick of your remote. This could be the beginning of the end for console setups that require controllers and cables as consumers choose a more connected player experience. For example, take your free-to-play game on the road to collect coins and gems. Then, when it's time to set up the raid of the century, plop down in front of your 65-inch display with a bowl of popcorn.

What does this mean for marketers?

Marketers finally have an opportunity to connect content across devices.

A marketer might focus on acquiring new audiences on mobile with the goal of converting them to spend more time on Apple TV. Consumers might discover a new show on mobile, but watch the full series on TV. The reverse is also possible. In fact, we've already seen the largest mobile game developers in the world advertise on the Super Bowl.

Consumer response can now influence interaction on other devices. This makes marketers even more concerned with consumer sentiment and gives them the tools to better tune their campaigns to avoid audiences that don't want their products.

Convergence of brand and performance

Advertising on TV hasn't changed much. It's still measured by Nielsen estimates based on 0.02% of the population. In the past, advertisers considered TV a "lift" channel, not a direct-response channel. Now, brand advertisers can emphasize engagement, because Apple TV breaks the barrier between brand and performance advertising. Real-time advertising on TV will help consumers engage with content they like and opt-out of things they don't care about.

This realigns marketer's incentives. Previously, publishers and entertainment companies were encouraged to show ads to as many viewers as possible. Now, consumers immediately engage and react when they view an ad, and publishers are motivated to deliver the right ads to the right consumers. The bottom line: transparent measurement of consumer reactions on TV means ads we all hate will stop running, because publishers will come up with methods to help viewers opt-out of the ads they dislike.

The big question: Will Apple support an advertising ecosystem that corresponds to how apps work today?

The answer is yes. With the release of tvOS, Apple created an advertising identifier similar to the iOS IDFA upon which marketers currently rely. The important thing about this is that it will likely come with the same user permissions to opt-out and create pathways for marketers to serve ads and monetize apps effectively via Apple TV. It's even possible Apple is thinking about the cross-device experience in disruptive terms, because tvOS will support deep links between apps.

So, developers: Get ready for the tvOS coming from Apple in late October. It's going to change your ability to reach and captivate the world.

Marketers: You have an important job to do. Deliver a better experience. Make your marketing pertinent, and your ads enjoyable, interactive, and immersive. Your campaigns should truly engage an audience.

Steve Jobs nailed it in 2010 -- consumers don't have time for amateur hour. 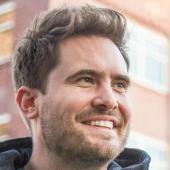 Peter Hamilton
Peter Hamilton is CEO of TUNE, a unified platform for mobile app marketing.
Follow View all articles by this author