Why Beats 1 Could Be a Visionary Media Move

In a World of Hyper-Niched Personalization, There Is Room for Monoculture
READ THIS NEXT
You Can't Stop Instagram Bots by Looking. Brands Have to Stop Buying Them

Trent Reznor is known for many things: frontman of Nine Inch Nails, an act that still fills stadiums; a masterful producer; outspoken commentator on the internet and artists rights; and one of a handful of musicians to have won both an Oscar and a Grammy.

But as news comes out about the ambitions behind Apple's new music offering Beats 1, we might need to add media visionary to the list.

While everyone has been fixated on what critics called a "cluttered and complex" offering that is Apple Music, the real story is the scope, scale and potential reach of Beats 1, its global radio channel with live DJs, which launched last week.

In a recent New York Times article, Reznor was named as the brains behind the launch of a global radio station that will far exceed the likes of BBC Radio One -- or potentially the melba toast-y Sirius XM -- in scale and scope.

His rationale was curiosity: In a world full of limitless choices, people disappear down into niche tastes.

In the Times piece, Reznor pondered the live, communal experience of an audience tuned in to the same songs. "I wondered if in today's world there is still a place for monoculture," he said. "Can that still exist?"

We've disappeared so much into our hyper-personalized and curated experiences that the collective experience -- and surrendering to the taste of a DJ -- has been somewhat lost. It wasn't long ago that disc-jockey legends like John Peel would break new artists in England and the world by virtue of their finely-tuned tastes and ravenous appetites for finding unpolished gems from stacks of promos.

The Beats 1 launch names are predictably boldfaced: Elton John is hosting a show, along with Pharrell and St. Vincent. It will be interesting to see how far they push the envelope in terms of programming and getting outside of mainstream music.

If Beats 1 features "today's pop hits and yesterday's favorites," it will fail. But if it is a champion for interesting music for a global creative class (or at least those who buy Apple products and aspire to be), then it could very well be interesting.

To find true appeal, Apple also needs to champion new talent, just as the BBC championed the now Beats 1 host Zane Lowe from an early stage. And find this talent from around the world, and not just London, New York and LA. What about Dubai, what about Tokyo and Johannesburg? Who are the up-and-coming hosts who have a reliable following that could benefit from a bigger stage?

Instead of hiring big EDM (electronic dance music) names that make for a good press headline, why not hire someone like Tim Sweeney, who has built a rabid global following for his "Beats in Space" podcast that blurs the line between disco, interesting house, techno and psych leanings? It's been running for 16 years and is exceptional week-in and week-out. Also, the name works.

The true success of this initiative will come down to many things: user experience, execution, programming and content.

But the concept is refreshingly new in a world of hyper-filtered algorithms and personal preferences piped directly into our ears. When wielded correctly, there is power in a big, global radio station with millions of active listeners -- provided the content is interesting and not boring, automated and predictable like Sirius. Also, the human touch with DJs and curators makes it more compelling than Pandora.

And what brand advertiser wouldn't want to have access to that type of global scale? Literally, everyone with an iPhone and an internet connection could be tuned into the same shows. Apple's monetization strategy remains to be seen, and they've traditionally not been interested in the advertising world. But this could be a major platform that could attract major attention if executed perfectly. 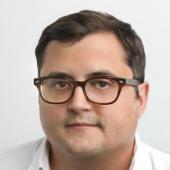 Colin Nagy
Colin Nagy is executive director of media and distribution at the Barbarian Group.
Follow View all articles by this author