READ THIS NEXT
You Can't Stop Instagram Bots by Looking. Brands Have to Stop Buying Them
An Uber driver uses the company's smartphone app inside a Tesla Motors Model S.
Credit: Angel Navarrete/Bloomberg

This year, "disruption" has been everywhere. We all want to be like Uber or Airbnb. Dollar Shave Club just sold for $1 billion. Alexa is the talk of CES. AI is about to change everything. Who doesn't want innovation?

And yet, while not many people know what "innovation" is, fewer still know how to do it.

Innovation is easy to be rude about. We've a history of the appearance of "innovovation": small young teams, funky furniture on the top floor, a neon sign with "innov8," trendy names. Sometimes "Labs,", as they are now known, look a bit more like a Skymall catalog than somewhere to really help clients. We tend to favor the physical over the transformative -- a 3D printer brings in more crowds than an API.

To get to the point of becoming truly innovative -- which is a vital, serious endeavor -- there are two questions that we must address.

In my experience, there are three general reasons for innovation, and it's vital to understand them before undertaking action. It's these reasons that define the brief, create clarity and aid prioritization.

A lot of innovation isn't about the results: it's about press. It's about building the physical manifestation of innovation that's going to showcase to the world that you are not resting on your laurels. It's the drone-delivered item that makes the CMO a little famous; it's the iPad in the flagship store that makes Wall Street look like you get it; it's the VR or Chatbot experience that will hopefully make it into AdAge. If you are innovating for this reason, then that's great. Be proud, be honest, hire the PR agency and let's go crazy. But let's not beat ourselves up when the ROI isn't great or, more likely, isn't known and let's not kid ourselves we drove the business.

The mantra of test-and-learn comes from Silicon Valley and is a wonderful way to think about our business in fast-changing and uncertain times. The digital age furnishes us with ample opportunity to try things, with limited budgets, and with enough agility to take measured bets. Don't know which headline? Don't know which platform? Unsure if this startup knows what they are doing? Fine. Try, measure, abandon, repeat, optimized, learn. If you are testing and learning, then your KPI is how much you learned. Far too many projects can fail fast and cheaply but then look, retrospectively, for metrics to show the failure somehow worked.

Some people want to innovate because they think that by acting fast and being first, they get more "bang for their buck." They are the first to work with Snapchat, the first to negotiate a data partnership, the first to embrace early-stage partners of a new media owner, or that secures rights to an up-and-coming star. This is innovation like venture capital, which knows that risks and rewards are the same. Adopt a robust approach, or accept the risk of being fast.

At what level should you innovate?

Imagine a business as an onion. On the outermost skin would be communications: how companies express themselves. Within this layer this would be marketing: the services, promotions, pricing and products made by the business. At the core of this onion, upon which everything else is built, are the business values, culture, processes and systems.

Innovation is easiest to undertake on the outermost layer, the communication layer. These changes require the least organizational effort, but usually receive the most visibility. Launching an incubation fund, hacking a vending machine, a user generated content competition, a VR experience at a trade show, all the most speedy innovation, but the most superficial too.

Innovation at the marketing layer makes a bigger difference but is harder. Shake Shack, Dollar Shave Club, Warby Parker, Casper and Wayfair are examples. Rapidly scaled, extremely valuable companies that have disrupted their marketing and gone against many industry norms, but are not a the core radically different companies to historical precedents.

Real innovation comes from companies that are built for this age. They have adopted new behaviors, new technology, new workflows and new thinking to their core. They have brought a paradigm shift in how people see business. They cause people to reframe what categories businesses even exist in. Here companies like Facebook, which has become a media owner of vast scale while not actually making content, Amazon challenging retail rules, Airbnb or Tesla are companies that truly break conventions with innovation at the core.

My advice to companies is to undertake the deepest most profound innovation you can and as deeply as possible. In the words of McLuhan, "first we shape our tools, then they shape us", so lets see what happens when we work around what's now possible.

Innovation is only going to get more important in a world empowered by faster improvements in technology, more demanding customers and more rampant competition.

Before engaging with others, first think about how best to do it and what you're really trying to accomplish.

Let's stop thinking of technology as a tattoo, a surface-level commitment best kept on a conspicuous but infrequently used part of the body. Instead, let's think of it as oxygen: essential to the beating heart of your business. 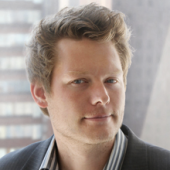