Companies Will Adapt to the Intelligent Web, or Die | Ad Age
Skip to main content
Sign In Register

Companies Will Adapt to the Intelligent Web, or Die

Social Data as the Future of Ad Targeting
READ THIS NEXT
You Can't Stop Instagram Bots by Looking. Brands Have to Stop Buying Them
Gurbaksh Chahal
Social networking is the most popular online activity worldwide. A recent study from comScore pegged social networking sites as accounting for one out of every five minutes spent online. More than half the world's internet-connected population visited Facebook in October, and Facebook users alone share roughly 4 billion pieces of content daily. The online world is witnessing an amazing change in how people consume and share content. Yet the potential for using social-media data in advertising is largely untapped. Advertisers are still largely invested in display advertising, a medium that in due time will produce diminished results because it is based in static, old data. The social Web is the way of the future. It's where you'll find consumers most of the time. It's where we will learn more and more about what they are interested in, what catches their attention, what compels them to share. This real-time medium not only creates an expectation of instant information and content, but it generates a vast amount of data about what interests and engages consumers right now. The disruption of legacy advertising networks is already in progress, though we're still only in about the third inning. The peak of the transformation of online advertising will take place over the next 12 to 18 months. During this time, we will see many more advertisers adapting to the "Intelligent Web" -- the new phase of the internet evolution in which real-time intelligence is used to automatically provide personalization. One advertiser that has led the way in this space is American Express, with programs such as Link, Like, Love, and most recently with Sync, Tweet, Save – a brilliant strategy that taps into the three key aspects of the Intelligent Web: open, social and real-time. Statistics show that time spent on social-networking sites is going up, as time spent on traditional ad websites decreases. As this happens, the traditional pixel data that advertisers use to target ads becomes less relevant. For one thing, this data is static –- whereas the new Intelligent Web is about harnessing real-time and open Web data, which is dynamic and in a constant state of change. Businesses that are not tying services into the social Web and the social graph soon will be out of business. If you don't believe me, look at what major online establishments are doing. Google, for one, recently launched Search Plus Your World as a way to incorporate more share graph data from its users into its search results. When Google moves, it's wise to at least pay attention. So why will legacy ad networks die? Can't they just adapt? The analogy that comes to mind is the mechanic who attempts to fix a plane that 's already in flight. Legacy ad networks have already taken off and, unfortunately for them, it is incredibly difficult to change their business model mid-flight to adapt to the demands of the Intelligent Web. They will need to develop entirely new products to exist in the Intelligent Web's highly social and real-time environment.

As Charles Darwin stated over a century ago: "It is not the strongest of the species that survives, nor the most intelligent that survives. It is the one that is the most adaptable to change." 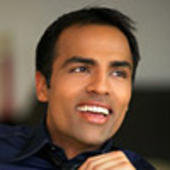